Cause of Alex fire that gutted 8 stalls unknown 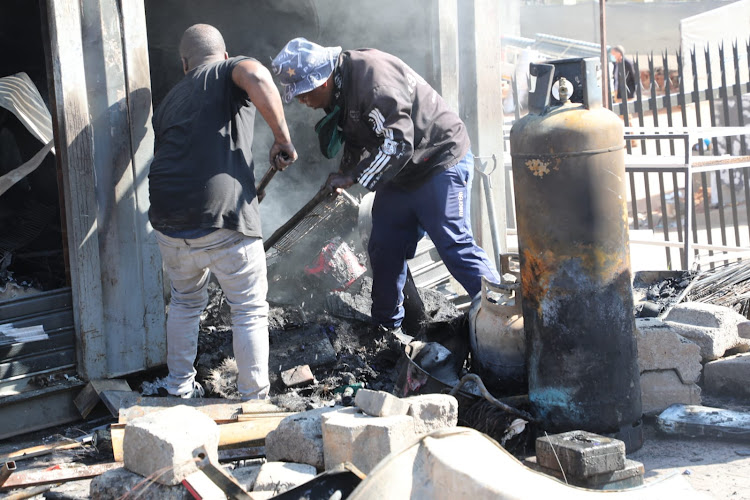 A fire broke out near the Pan-Africa Mall in Alexandra on Wednesday night.
Image: Antonio Muchave

Eight stalls were gutted by fire on Wednesday night near the Pan-Africa Mall in Alexandra, Johannesburg.

“Last night at around 8.30pm we responded to a fire incident at the Pan-Africa Mall in Alexandra. A number of stalls outside the mall were on fire. Seven to eight stalls were affected. We managed to extinguish the fire to prevent it from spreading to nearby stalls,” said Mulaudzi.

Mulaudzi said there were no injuries or fatalities reported and the cause of the fire is unknown.

He said investigations are under way to determine the cause of the fire.

“We also want to distance ourselves from allegations that the fire might have been caused by an altercation between members of Dudula [Operation Dudula] and foreign nationals. We do not want to involve ourselves on that one. We do not have evidence to that effect.

When Sowetan visited the scene of the blaze on Thursday morning, dozens of people were standing next to the stalls looking on as their owners were walking through the debris, cleaning up and trying to find what was left from the damage.

Mokgadi Mashitatona, 51, whose family ran three of the burnt stalls, said they lost stock worth R60,000 in the fire.

“This business helped us to buy food, pay for our children’s school fees and buy more stock. I do not know how we are going to survive,” said Mashitatona.

Police and Johannesburg Metro Police Department officers were at the scene monitoring the situation.

WATCH | Eight stalls were gutted by fire on Wednesday night near the Pan-Africa Mall in Alexandra, Johannesburg. https://t.co/NFxFdzesPI pic.twitter.com/8Wcj82KKAT

Eight stalls were gutted by fire on Wednesday night near the Pan-Africa Mall in Alexandra, northern Johannesburg. @SowetanLIVE pic.twitter.com/VOqPe08Tg9

The Masitatona family owned three of the eight stalls that were burned. The family says they lost stock worth R60000 in the fire incident at Pan-Africa Mall in Alexandra. @SowetanLIVE pic.twitter.com/NBeSuSSwKj

Four people, including three siblings, died in a shack fire allegedly caused by a paraffin stove left unattended in Marathon informal settlement in ...
News
3 weeks ago

On the trail of Joburg’s arsonist, authorities on high alert

A tip-off line 083 939 0300 has been set up by a security company for anyone who has information relating to the house fires in northern Johannesburg.
News
1 month ago

Limpopo police are hunting for suspects who attacked a 74-year-old farmer and his wife and set their home alight – leaving the couple burnt beyond ...
News
1 month ago
Next Article