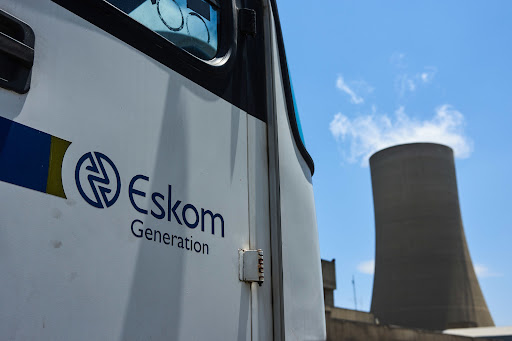 Stage 2 load-shedding will be implemented from 5pm to 10pm on Wednesday due to the failure of three generation units. File photo.
Image: Bloomberg

By May 10 Eskom had implemented 32 days of load-shedding this year, compared to 26 days over the same period last year.

Eskom CEO André de Ruyter on Wednesday gave an update on the state of the system and the power utility's operational performance.

He said the electricity grid was constrained, with an increased risk of load-shedding over winter, particularly during the morning and evening peaks.

During the next few weeks, Eskom will return to service two units at Kusile power station and Koeberg unit 2, which is expected to return by the end of June 2022.

The three large generation units will add about 2,500MW to the system.

“Unit 2 at Koeberg, together with the two-generation units expected to return to service after modification and correction of the design defects on one unit and repairs to the flue gas desulphurisation technology on the other unit at Kusile, will significantly ease the demand pressure in time for the high winter demand. These Kusile units will add a combined 1,600MW to the power system, while Koeberg 2 will add another 920MW when it returns to service by the end of June.”

He said Eskom has, since January, had to operate with a single unit at Koeberg while the other unit was shut down for routine refuelling and maintenance.

“Added to this Koeberg capacity being offline for this period, Eskom has also had to cope without the 794MW normally contributed by the damaged unit 4 of Medupi power station. Together, these two units are responsible for the implementation of almost two stages of load-shedding.”

Group COO Jan Oberholzer said the power utility has used more than expected diesel for its open cycle gas turbines (OCGTs) due to the system constraints.

The increased load-shedding was due to higher levels of unplanned plant breakdowns which averaged 26% of the fleet to the end of March 2022.

During this period, the energy availability factor (EAF) averaged 62%.

“With power stations reaching the end of their operational life the gap will increase. Bringing new capacity onto the grid as soon as possible is critical and requires an SA Inc approach.” 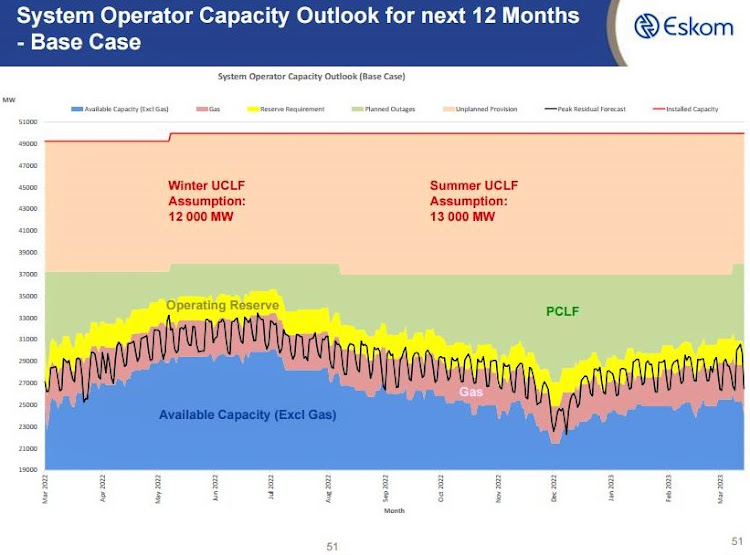 Eskom's System Operator Capacity Outlook for the next 12 months - Base Case.
Image: Supplied

Coal stock levels are healthy, with an average of 38 days’ worth, excluding Medupi and Kusile.

“Coal stocks jump to an average 77 days’ worth of stock when those two are included.”

Oberholzer said the Koeberg long-term operation activities to enable it to operate for another 20 years beyond 2024/2025 are under way.

Eskom will, by June, submit the required supporting documentation to the National Nuclear Regulator (NNR) for evaluation.

“Significant progress is also being made in the completion of the new build Kusile power station. Unit 4 achieved full load of 800MW on January 11 and successfully accomplished the 30-day reliability run on April 27 as commissioning tests continue towards commercial operation. The unit was first synchronised to the national grid on December 23 2021 and is on course for commercial operation by July.

Eskom says stage 2 load-shedding will be implemented from 5pm to 10pm on Monday as the power system is severely constrained.
News
2 weeks ago

Power utility Eskom says illegal connections, tampering of mini-substations, vandalism and theft are some of the reasons behind the nine-month ...
News
1 week ago

The modification and correction of the major design defects on the boiler plant at Medupi have been completed.

“This has significantly improved the performance of the power station, helping to limit the implementation of load-shedding. Medupi’s energy availability factor (EAF) rose to 67% by the end of April, up from 46% in April 2020 before the modifications.

“Each of the six-generation units had to be switched off for 75 days to perform this work. This will prove to be a worthy sacrifice for the people of SA who have had to endure long hours of load-shedding for Eskom to correct these poor designs.”

Oberholzer said once the agreed technical solutions are complete at both stations, Eskom expects Medupi and Kusile to form the backbone of an evolving and greener power system that will take SA into a more sustainable and dynamic energy industry.

“One thing in favour of the country is the world-class and effective management by the transmission system operator, whose main task is to maintain the balance between supply and demand,” said Scheppers.