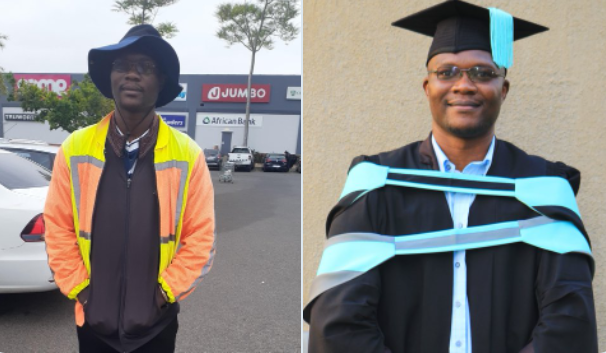 Congolese asylum seeker Fabrice Kapya braved the journey working as a car guard while he drove his dream towards his PhD.
Image: Supplied / University of Pretoria

A chemical engineering graduate who collected tips while he worked as a car guard at Wonderpark Mall in Akasia, Pretoria, is not only an assistant lecturer in the department of industrial and systems engineering at the University of Pretoria (UP), but also a PhD candidate in the subject.

Fabrice Kapya, who is originally from the Democratic Republic of the Congo, said he arrived in SA as an asylum seeker in 2018. He had an engineering degree from the University of Likasi, having already experienced a tough time paying for it after the death of his father.

“After my father’s death, we lost practically everything,” Kapya said. It was through the generosity of friends who volunteered to finance his studies  that he obtained the degree.

He arrived in SA with no resources and no job.

A chief harbour master who started as a taxi driver in Mamelodi, Pretoria, graduated with a postgraduate diploma in maritime studies at the ...
News
1 month ago

“Where I come from, we know not to trust the government as it uses terror to control people. It violates basic human rights through fear, intimidation and segregation. No-one can hold them accountable,” said 31-year-old Kapya.

He started working as a car guard at Wonderpark Mall from 7am to 8pm, where he made about R2,000 a month.

“I had about R900 to R1,000 left every month after covering all expenses such as rent and groceries.”

“The circumstances around that admission are still a miracle to me. I was returning from the Tshwane University of Technology after submitting my application when a friend who was studying at UP at the time asked me to stop by the university.

“After a long discussion, she convinced me to apply to UP. But there were only two days left before international applications closed, and at most universities, priority is usually given to those who apply first.”

He thought he had no chance of being accepted, but to his surprise in November 2018  Kapya was admitted to industrial and systems engineering.

When he started his course in March 2019, Kapya was working as a car guard and had the added difficulties of navigating the language barrier and no background in industrial engineering.

Kapya said while he was studying, he experienced immense generosity from his classmates.

“While I was doing my honours modules, my classmates gave me food, paid for my transport or paid my rent and assisted me with their notes.”

Kapya said he was studying in the parking lot with his student card around his neck.

“I stayed strong even though I could not feel my legs or waist, even though my body was sore.”

Port master is captain of her career

The Port of East London’s Sharon Sijako is one of three women captaining a commercial harbour in South Africa.
SebenzaLIVE
1 year ago

In December 2019, he caught a lucky break. A donor who parked her car in Kapya’s area offered to put up about R18,000 for his studies.

“This allowed me to pay what I owed UP, and in July 2020 I completed my honours degree.”

In 2021, he was accepted for a master’s programme in industrial systems, and in February 2021 UP offered him a position as an assistant lecturer in industrial and systems engineering.

“UP cared about my success. I received an award of R18,000 from the university in December 2021 and completed my master’s degree in January 2022, 11 months after registration,” he says.

“Today I am a PhD candidate.”

Kapya credits Prof Sarma Yadavalli, head of the department of industrial and systems engineering, and his supervisor, Prof Olufemi Adetunji, for believing in him.

“My thanks also go to Joe Dimbata for allowing me to work at Wonderpark Mall and for being a mentor.”