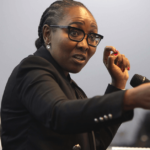 Judge Lebogang Modiba has been appointed as president of the Special Tribunal.
Image: Judges Matter

Judge Lebogang Modiba has been named president of the Special Tribunal.

Modiba takes over from judge Mlindelwa Gidfonia Makhanya, who has retired.

The appointments are effective from May 1.

Modiba, a judge of the Gauteng high court and recently appointed to the electoral court, has been a member of the Special Tribunal since 2019.

Dauffe and Naidoo replace judge Billy Mothle, who has been appointed to the Supreme Court of Appeal, retired Western Cape high court judge Siraj Desai who is now the legal service ombud, and judge David van Zyl who is focusing on his role as the deputy judge president of the Eastern Cape provincial division of the high court.

Special tribunal judges who have been retained are Thina Siwendu, Kantharuby Pillay and Johannes Willem Eksteen.

A former state attorney official together with a family member and an associate are in hot water after the Special Tribunal ordered they must pay ...
News
2 weeks ago

Three companies linked to former health minister Zweli Mkhize's son and wife are among five entities the Special Tribunal granted leave to join in a ...
News
1 month ago