'Hillary’s passing has proven we are able to band together in times of tragedy': Gardee family 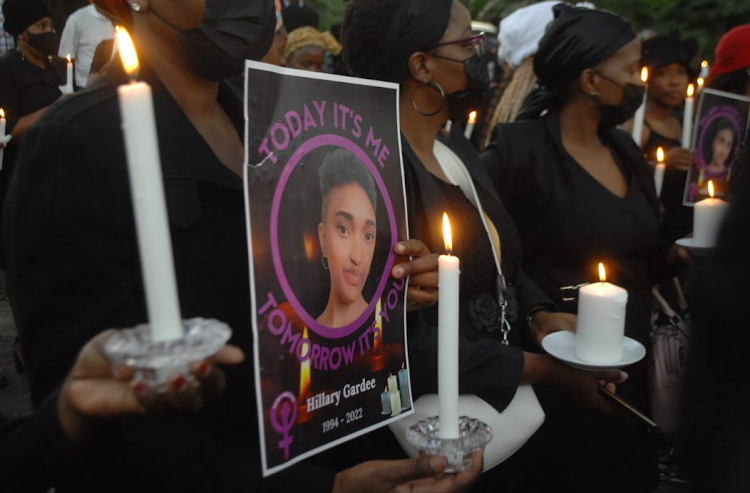 A group of women clad in black clothing, some in red and others in black doeks, gathered at the Gardee home in Mbombela as they carried candles in honour of slain Hillary Gardee.
Image: Ziphozonke Lushaba

The family of  murder victim Hillary Gardee said on Sunday they will allow the legal system to conduct its work as Hillary, the family and the people of SA will not know peace until justice is served.

They expressed their gratitude for the support after the passing of Hillary Gardee, daughter of former EFF secretary-general Godrich Gardee.

The 28-year-old IT graduate was found murdered on Tuesday, four days after she disappeared.

Her body was found in a field outside Mbombela.

One suspect was arrested on Friday in Schoemansdal near Mbombela, with two more arrests on Saturday night and early Sunday morning, Mpumalanga police confirmed.

“We hope this matter will be resolved speedily, without unnecessary postponements and prolonged deliberations to show perpetrators of gender-based violence that our judicial system is harsh and firm on this type of crime,” the family said in a statement.

They said their grief was eased by the outpouring of love from the people.

“Both prominent and ordinary and the amount of comfort we have received from the care and compassion is immeasurable. We wish to thank the people of Mpumalanga, SA and the continent for participating in the search and rescue efforts both on the ground and on social media. It is our collective wish that we could respond to all the messages of support and condolences on all media platforms, however during this period of mourning, this has not been possible.

Their speedy response to resolving this matter and finding the perpetrators is one which we wish they will emulate in all other criminal matters.

“We extend our gratitude to the SA Police services and the entire investigative team for their patience, commitment and diligence, even when confronted by our grief, anger and frustration. Their speedy response to resolving this matter and finding the perpetrators is one which we wish they will emulate in all other criminal matters.”

“To civil society and the media fraternity, we thank you for your messages of support and raising of awareness of the murder of Hillary. It is indeed an unfortunate but instructive tragedy, that all of us as a society must rally together to fight against gender-based violence and urge the men in this country to cease the war on women.

“Hillary’s passing has proven to us that we are not enemies, but human beings who are able to band together in time of tragedy.”

Thanking the EFF, the family said they are truly blessed to be part of a movement that resembles a family.

“The organisation has been with us from day one and our appreciation for the contribution our movement has made in giving our daughter dignity towards her final resting place will never be forgotten,” the family said.