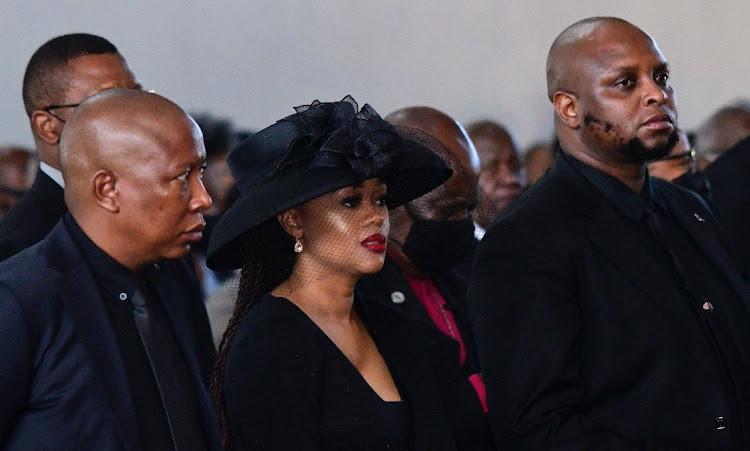 EFF leader Julius Malema, his wife Mantoa Matlala and deputy leader Floyd Shivambu at the funeral service of Hillary Gardee in Mbombela on May 7 2022.
Image: Twitter/EFF

EFF leader Julius Malema suggested at Hillary Gardee's funeral on Saturday that her killers are far from poverty-stricken.

“They wear suits and call themselves gentlemen. They are not nyaope addicts. They own properties in Nelspruit and some of them have political credentials,” Malema told mourners in Mbombela.

Hillary's body was found on Tuesday, four days after she disappeared. The 28-year-old daughter of former EFF secretary-general Godrich Gardee was shot in the head.

Lawyer Gardee suggested in a video tribute shown at the funeral that his daughter was the latest victim of criminals who abduct people off the street then force them to make electronic cash transfers in return for their freedom.

CIC @Julius_S_Malema, the leadership of the EFF and the family throwing and helping cover the grave of Hillary Gardee’s final resting place, with soil.

Malema told mourners that after Hillary's killing, he fears for the lives of his own children. “We are all scared, asking if our children will be next. If politicians can be scared, what about ordinary citizens?”

Malema pleaded with parents, especially men, to show their children love, suggesting boys who do not have relationships with their fathers often turn to crime.

“Hug the boy child, including those you have abandoned, because they are the ones who are criminals,” he said.

“These things (Hillary's killers) were never shown love. There's no way that someone who was shown love could stab her whole body the way these ones stabbed Hillary. This is an act of self hate.”

The EFF leader said he was happy Gardee had committed to take care of the three-year-old girl Hillary was looking after as if she were his own granddaughter.

“Let's love this daughter of Hillary. She must get the best love and never think that no one wants her, or blame herself for what happened,” Malema said.

He asked police minister Bheki Cele, who revealed earlier that the 39-year-old murder suspect arrested on Friday in connection with the murder was due to get married on Saturday, to ensure the best investigators are used to ensure Gardee's alleged killers are not granted bail.

“They must go on trial while in jail,” Malema said, thanking Mpumalanga police commissioner Lt-Gen Semakaleng Manamela for effecting an arrest.

“We also appreciate the efforts of intelligence and have it on good authority that everyone will be arrested soon,” Malema said.

On Friday night, Manamela hinted more arrests could be made soon. “Our investigation is still continuing and we are not ruling out the possibility of arresting more suspects,” she said.

In a recorded tribute by Godrich Gardee to his murdered daughter, Hillary said he never thought in his wildest dreams that he would one day have to ...
News
3 months ago

The Mpumalanga police have arrested a suspect in connection with the murder of Hillary Gardee, the daughter of former EFF secretary general Godrich ...
News
3 months ago

"She was a warrior. She was a fierce woman. She wouldn't want us to sit here and be sad. Let's pick up Hillary's spear and carry on." These were the ...
News
3 months ago
Next Article