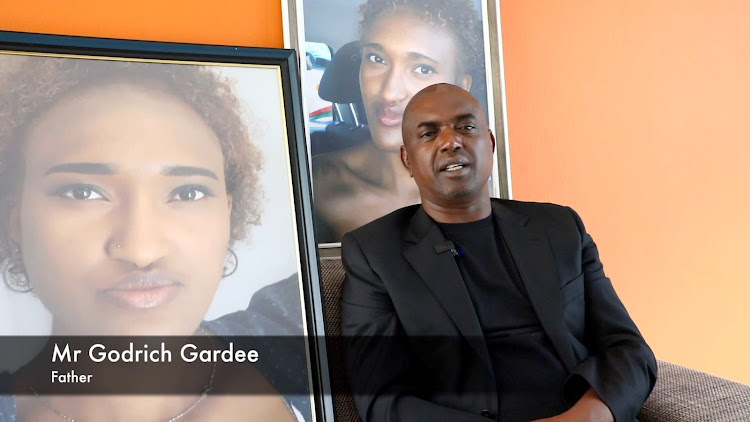 Godrich Gardee in the video tribute to his murdered daughter, Hillary, screened at her funeral in Mbombela on May 7 2022.
Image: EFF

In a recorded tribute by Godrich Gardee to his murdered daughter, Hillary, the former EFF secretary-general said he never thought in his wildest dreams that he would one day have to make funeral arrangements for her.

“We birth children to bury us and not to bury them,” Gardee said in a video screened at Hillary's funeral in Mbombela on Saturday.

“In you we saw a bright future, but that was not to be. Instead, we found you with injuries showing you were hit with a blunt object, with a gunshot wound at the back of your head, with a bleeding nose.”

Gardee, now practising as an attorney, described how he and his family had to identify Hillary, 28, where she was found in an Mbombela field on Tuesday. “I stumbled and fumbled and nearly fell on top of you.”

He criticised Mbombela residents who he said failed to report to police that they had been abducted and made to withdraw money from their bank accounts. In a cardless banking transaction, Gardee sent herself R1,300 around the time of her abduction, and her three-year-old told strangers who found her in the street that her mother had been “fighting”.

“More than 100 people have failed to report this to police. Their silence killed you,” said Gardee, addressing Hillary.

“The silence of police and failure to investigate dockets on their desks killed you. You were killed by silence of your country of this new crime.

“You gave them (Hillary's abductors) a fight and they were frightened, and that's why they killed you.”

[WATCH] "It never occurred to me and your loved ones that we would have to identify you in a bush lying face down with your hands clutching tightly on grass and shrubs fighting for your life" - Godrich Gardee pays tribute to his daughter #HillaryGardee https://t.co/Hlr6BM8ekn pic.twitter.com/vk9W8HRisV

Gardee shared Hillary's struggle to secure permanent employment, saying it was because he was her father. “No one wanted to employ you because your surname is Gardee.”

He ended his tribute by saying the last phone calls and texts between him and his daughter before she disappeared would “remain indelible”. Referring to the three-year-old Hillary was caring for, he said: “I will look after your child as my granddaughter.”

The Mpumalanga police have arrested a suspect in connection with the murder of Hillary Gardee, the daughter of former EFF secretary general Godrich ...
News
2 weeks ago

Gardee murder another reminder women are not free in SA

May the soul of Hillary Gardee rest in peace, and her family be consoled in this difficult time.
Opinion
3 weeks ago

"She was a warrior. She was a fierce woman. She wouldn't want us to sit here and be sad. Let's pick up Hillary's spear and carry on." These were the ...
News
2 weeks ago
Next Article