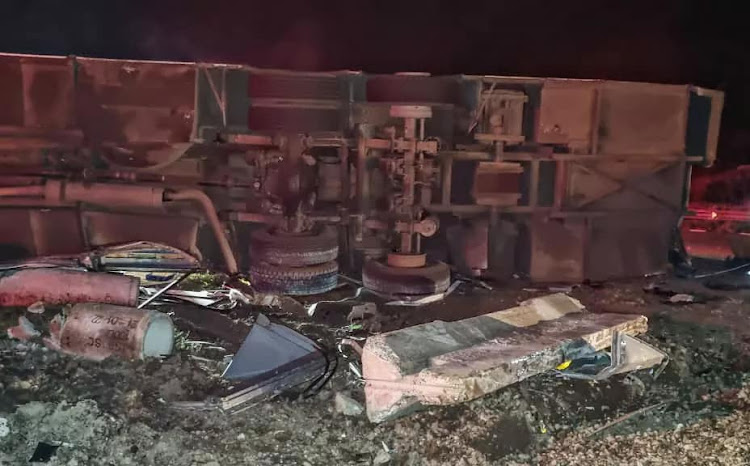 A fully laden bus carrying wedding guests from Umzimkulu to Nongoma had collided with the concrete barriers and overturned at the traffic diversion on the N2 Umhlali River Bridge.
Image: supplied

An urgent appeal has been made to the SA National Roads Agency (Sanral) after three vehicles crashed into concrete barriers acting as safety measures in Umhlali on the KwaZulu-Natal north coast.

The safety measures were installed after the road was damaged during the floods that ravaged the province in April .

“The DA in KwaDukuza has written to Sanral urgently requesting the implementation of additional measures, among them, speed-monitoring devices to alert motorists of their speed before entering the zone, ie, slow down LED signage and the use of highly reflective material on the concrete barriers.”

“The DA will continue to monitor this high accident zone, and ensure that our requests to Sanral are urgently implemented to prevent further risk to lives and potential fatalities,” Makhan said.

Sunday, 01 May 2022 We urge motorists to take care while traveling on N2 through the detour near the Umhlali River...

On Sunday afternoon, IPSS Medical Rescue urged motorists to take care while travelling on the N2 through the detour near the Umhlali River Bridge after two vehicles crashed into concrete barriers.

On Monday morning, a bus carrying wedding guests from Umzimkulu to Nongoma hit concrete barriers and overturned at the traffic diversion.