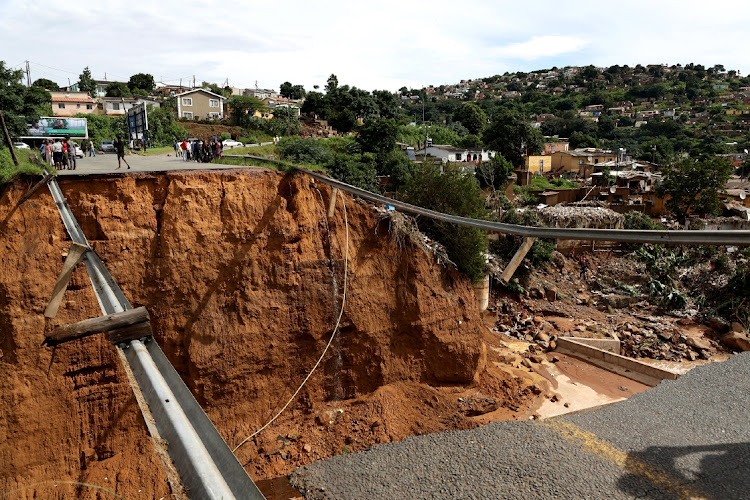 More than 1,300 roads were damaged by the recent floods and about R6.3bn is required to repair the damage.
Image: Sandile Ndlovu

Technicians fixing a road that washed away during the recent floods were robbed of a provincial department of transport vehicle outside Umlazi on Wednesday.

Transport, community safety and liaison MEC Peggy Nkonyeni said the officials were held at gunpoint at a Shell Garage in KwaMuthwa outside Umlazi, south of Durban.

The suspects fled in the white Ford Ranger double-cab bakkie.

The technicians were travelling from a site where they were fixing the L1159 in Umbumbulu.

“A case of carjacking has been opened and is being investigated by the police. The department appeals to anyone with information to share it with the police to recover the vehicle,” said Nkonyeni.

Teams were hard at work, collaborating with other spheres of government as part of the recovery and reconstruction plan to rebuild KwaZulu-Natal.

Parliament has established a special committee to oversee the implementation of flood relief measures and rebuilding in flood-devastated ...
News
2 months ago

Personnel from other parts of the province had been assigned to assist in the flood-ravaged districts, including eThekwini metro, Ugu, Ilembe and King Cetshwayo districts.

The department has 1,369 road infrastructure projects affected by the floods and required about R6.3bn to repair the damage.

“Our teams are doing all they can to attend to all flood affected projects, only to be traumatised and be victimised by criminals. This is undermining the government-led recovery and reconstruction plan. We strongly condemn this act of criminality and it must be punished harshly. Government officials and equipment are public resources and are servicing the community.”

“What kind of society would attack and harm the assistance meant to restore projects affecting their livelihood? We appeal to the police to urgently find the perpetrators. Communities as well should protect state employees and state equipment,” said Nkonyeni.