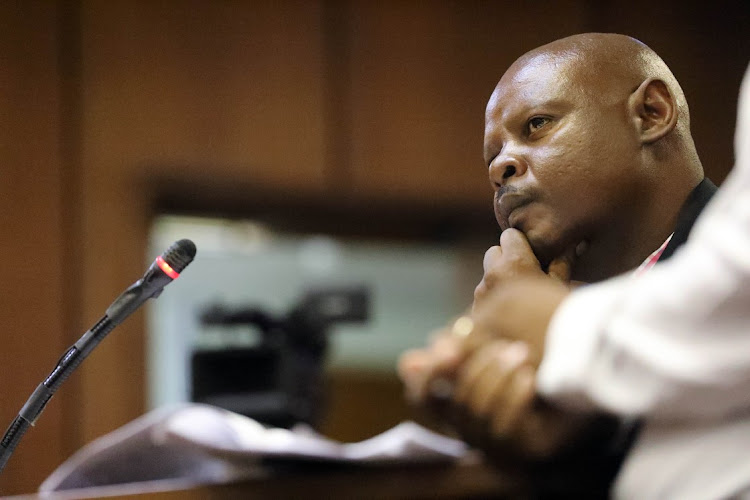 Sgt Thabo Mosia on the witness stand at the Senzo Meyiwa trial in the North Gauteng High Court in Pretoria.
Image: ANTONIO MUCHAVE

The first day of SA’s long awaited criminal trial of the men accused of killing former Bafana Bafana goalkeeper Senzo Meyiwa started with drama and a glimpse of what police found when they arrived at the house where he was killed.

Sgt Thabo Mosia took the stand in the high court in Pretoria as the first state witness explaining how a team of investigators combed then Meyiwa’s girlfriend’s home, tracing every little bit of evidence they could find to locate his killers.

Mosia arrived just 20 minutes after midnight on October 27 2014, just hours after the Orlando Pirates and SA captain had been brutally murdered.

He told the court that on his arrival, he found his colleague Brig Ndlovu at the scene which had already been cordoned off. 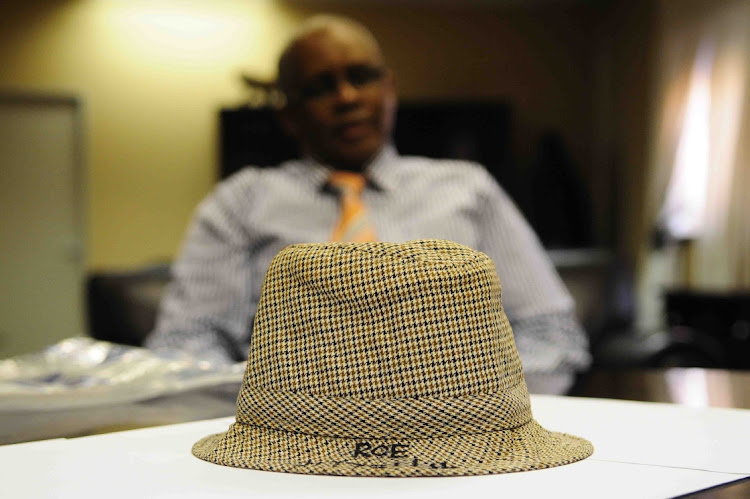 The hat left by one of the alleged gunmen after Senzo Meyiwa was shot and killed at Kelly Khumalo’s home.

“We conducted a walk through the crime scene. I then protected and secured a bullet jacket, a [black, white and brown scotch] hat and grey walking stick... I protected the scene for photography and forensic investigation. I took the exhibits with me,” he said.

Mosia said he also spotted a bullet hole in the kitchen door which was used by the suspects to gain entry to the house. After securing the crime scene, Mosia said he called one of his colleagues who summoned the provincial crime scene management team.

He said he also briefed the team when it arrived and together they had a walkabout of the scene uncovering more evidence in the house.

The investigators were able to trace the bullet that had left a hole in the door to a kitchen unit next to glass jars.

“I think it deflected and changed direction after hitting the door,” Mosia said.

Investigator also discovered that there was blood next to the television stand in the sitting room which they took samples of. Police also found a can of Smirnoff cider and Heineken beer bottle which were both taken for analysis.

Mosia gave evidence while in pains as he is recovering from a back operation. He would give evidence standing and after a while he would sit. At some stage, judge Tshifhiwa Maumela saw that he was struggling and offered to give him a comfort break but he rejected it, opting to soldier on.

As he gave evidence in a packed high court, Meyiwa’s family sat quietly not far from the five accused. There was a heavy police presence.

Mosia counted at least 11 swabs for DNA samples that were taken at different surfaces in the house to ensure no evidence went to waste.

“All forensic bags were placed inside one bag... I booked all the exhibits in Springs office for safekeeping,” he said.

Sgt Thabo Mosia created a sketch plan and took photos of the crime scene shortly after the 2014 murder of footballer Senzo Meyiwa.
News
2 months ago

Mosia read on the record numbers of each of the forensic bags and pictures he took explaining what was happening to each of them. He counted as many as 100 different pictures taken in different angles and focus at the crime scene.

Meyiwa was killed at his then girlfriend Kelly Khumalo’s home on the East Rand, in an alleged robbery that shocked the nation.

The five face charges of premeditated murder, attempted murder, robbery with aggravating circumstances, possession of firearms without a licence and possession of ammunition. They have pleaded not guilty.

After Mosia completed his evidence, the court then dealt with the complaint made by Adv Maselela Teffo on behalf of Mncube, who claimed that he had been assaulted and tortured at the Kgosi Mampuru prison where he is being detailed. Teffo also complained that Mncube, who is also serving a separate 12-year sentence for attempted murder, is being kept at the maximum section of the prison with “hardcore criminals”.

A reply to the allegation was read by prosecutor George Baloyi in which the prison officials said there was no evidence the Mncube had been assaulted and his incarceration at the maximum section was done bases on risk assessment.

Teffo said he plans to take correctional services to the equality court for the unfair treatment his client has faced.

Ntuli’s lawyer, Adv Zandile Msholo also complained that his client was kept in isolation from other inmates to which Maumela offered the same solution that Teffo wanted to pursue.

Maumela also ordered Khumalo’s lawyer Magdalene Moonsamy, who was observing proceedings, to leave the courtroom after both the defence and the state complained about her presence and benefiting from the evidence being given by witnesses.

Meyiwa's cousin, Nomalanga Meyiwa, said: “For now we are relieved that the trial has started. We hope  there will be no delays anymore.”

The trial continues on Tuesday.

A hat, a bullet case and walking stick in the kitchen are some of the items that were found by police as they combed Senzo Meyiwa’s murder scene just ...
News
2 months ago

The first expert witness in the Senzo Meyiwa murder trial is expected to take the stand on Monday in the high court in Pretoria.
News
2 months ago

The five men accused of murdering footballer Senzo Meyiwa nearly eight years ago have denied any involvement in his killing.
News
2 months ago
Next Article