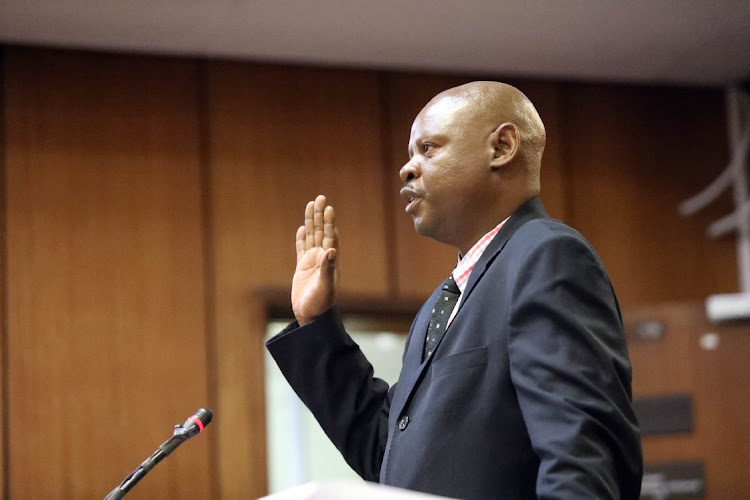 A hat, a bullet case and walking stick in the kitchen are some of the items that were found by police as they combed Senzo Meyiwa’s murder scene just hours after the Bafana Bafana star was killed.

Sgt Thabo Mosia took the stand on Monday as the first witness for the state to describe the scene on October 26 2014 not long after Meyiwa had been murdered.

Mosia told the court that he arrived at the scene about 20 minutes after midnight after receiving a call to respond to a murder scene.

On his arrival, he found his colleague Brig Ndlovu, who explained what had happened.  The scene had already been cordoned off with crime scene tape.

“We conducted a walk through the crime scene. I then protected and secured a bullet jacket, a [black, white and brown scotch] hat and grey walking stick...I protected the scene for photography and forensic investigation. I took the exhibits with me,” he said.

Mosia said he also spotted a bullet hole in the kitchen door which was used by the suspects to gain entry to the house. After securing the crime scene, Mosia said he then called one of his colleagues who organised the provincial crime scene management team to come.

Lawyer consult with the five accused in the Senzo Meyiwa murder. Trial begins today in the Pretoria High Court. pic.twitter.com/mO4tQG0295

The same morning, the team arrived and he briefed it on what he had seen earlier. Mosia, together with the team, then had a walkabout of the scene with the provincial team.

It was during the walkabout that Mosia and the team were able to trace the bullet that had left a hole in the door to a kitchen unit next to glass jars. “I think it deflected and changed direction after hitting the door,” Mosia said.

He said DNA swabs were then taken from one of the bedroom doors and the blood that was next to the television stand. Police also took pictures of all the evidence they found on the scene.

Sgt Thabo Mosia created a sketch plan and took photos of the crime scene shortly after the 2014 murder of footballer Senzo Meyiwa.
News
3 months ago

Meyiwa was killed at his then girlfriend Kelly Khumalo’s home in Vosloorus, on the East Rand, in an alleged robbery that shocked the nation.

Muzikawukhulelwa Sibiya, Bongani Sandiso Ntanzi, Mthobisi Prince Mncube, Mthokoziseni Maphisa and Sifisokuhle Nkani Ntuli have been charged with his murder. The five face charges of premeditated murder, attempted murder, robbery with aggravating circumstances, possession of firearms without a licence and possession of ammunition.

As Mosia gave evidence in a packed high court in Pretoria, Meyiwa’s family sat quietly not far from the five accused. A heavy police presence was in court and the case attracted a huge media interest.

Earlier, judge Tshifhiwa Maumela ordered Khumalo’s lawyer Magdalene Moonsamy, who was observing proceedings, to leave the courtroom after both the defence and the state complained about her being in court and benefiting from the evidence being given by witnesses.

The first expert witness in the Senzo Meyiwa murder trial is expected to take the stand on Monday in the high court in Pretoria.
News
3 months ago

The five men accused of murdering footballer Senzo Meyiwa nearly eight years ago have denied any involvement in his killing.
News
3 months ago

The trial against five men accused of killing soccer star Senzo Meyiwa hit yet another snag on Monday with one of the accused’s lawyers requesting a ...
News
4 months ago

Nearly a decade after the killing of Bafana Bafana star Senzo Meyiwa, his murder trial is set to begin and hopefully bring his family much-needed ...
News
4 months ago
Next Article