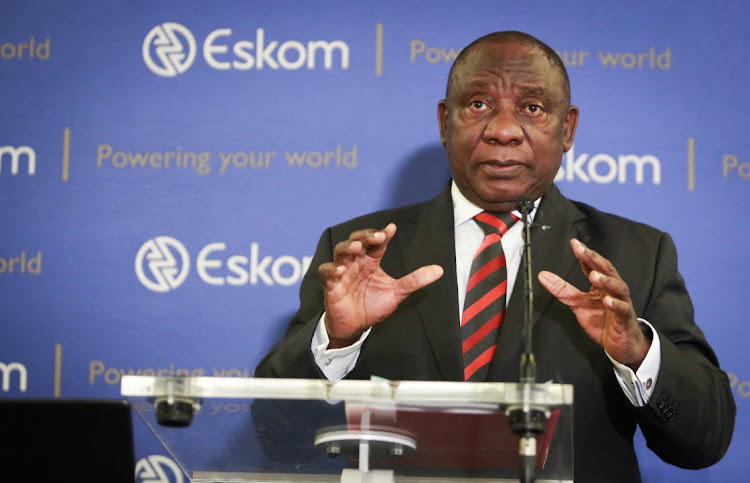 The energy landscape is being transformed, the problems at Eskom are steadily being addressed and substantial new energy generation capacity is being built, says President Cyril Ramaphosa. File photo.
Image: Sebabatso Mosamo/Sunday Times

While the country has grappled with power cuts for more than a decade, President Cyril Ramaphosa says citizens “owe” full support to Eskom's board and staffers who, despite several challenges, are doing their best keep the lights on.

He made the remarks in his Monday weekly newsletter in the wake of another round of load-shedding last week as a result of breakdowns at Eskom power stations.

To solve the energy crisis, Ramaphosa said it was imperative to understand the root causes, ranging from an old fleet of coal-fired power stations whose performance was deteriorating, the devastating impact of state capture and Eskom’s huge debt burden, and more than R36bn of outstanding municipal debt.

“In short, the load-shedding we experience now is the result of policy missteps and the impact of state capture over many years. This is the situation that we have confronted since the start of this administration and we are working to fix it,” Ramaphosa said.

“In doing so, we owe the board and management of Eskom our full support as they work to turn the utility around. They have to keep the lights on while rebuilding Eskom as a viable entity that fulfils its developmental mandate as a state-owned enterprise and positioning it for a just energy transition.

An “unacceptably high” level of lost power generating capacity, wet coal caused by unpredictably heavy rains and delays in the addition of renewable ...
News
2 months ago

“We also owe our full support to the many hardworking employees of Eskom, including power plant workers. Despite many challenges, they are doing their best to keep our ageing plants running and supply the electricity the country needs.”

For many South Africans it had become difficult to imagine a future without load-shedding, but he said significant strides had been made to address the problem.

Among other things, the revival of the Renewable Energy Independent Power Producers Procurement Programme which enabled 2,205MW from Bid Window 4 to proceed to construction, most of which has now been connected to the grid.

“A further 5,200MW of solar and wind power is being procured through Bid Windows 5 and 6. This additional generation capacity is due to connect to the grid from late 2023.

“The Integrated Resource Plan 2019 provides for a further 3,000MW of gas and 500MW of battery storage to be procured from independent power producers,” he said.

Ramaphosa also cited the Electricity Regulation Amendment Bill gazetted for public comment in February. The bill will allow the establishment of an independent transmission and system operator, among other functions.

“This means that while the national grid will remain owned and controlled by the state, there will be competition among multiple generators selling power to distributors and customers.

“The introduction of a competitive electricity market will unleash new investment in generation capacity and will be a key driver of economic growth.”

The government was doing everything in its power to ensure that, like state capture, load-shedding becomes a thing of the past, he said.

"It is difficult to expect the millions of South Africans grappling with the inconvenience and hardship caused by intermittent power outages to remain patient as we resolve these long-standing challenges. It is difficult to convince them, as they sit in the dark, that we are making progress towards a secure and reliable supply of electricity.

"But the reality is that the energy landscape is being transformed, the problems at Eskom are steadily being addressed and substantial new energy generation capacity is being built.”

Eskom board member Busisiwe Mavuso excused herself after she had a heated interaction with the chairperson of parliament's standing committee on ...
News
2 months ago

Eskom to suspend load-shedding in time for the weekend

Load-shedding will be suspended at 10pm on Friday.
News
2 months ago

Eskom spent just under R7bn on diesel to run its emergency generation plants in the last financial year and about R3.5bn on independent power ...
News
2 months ago
Next Article