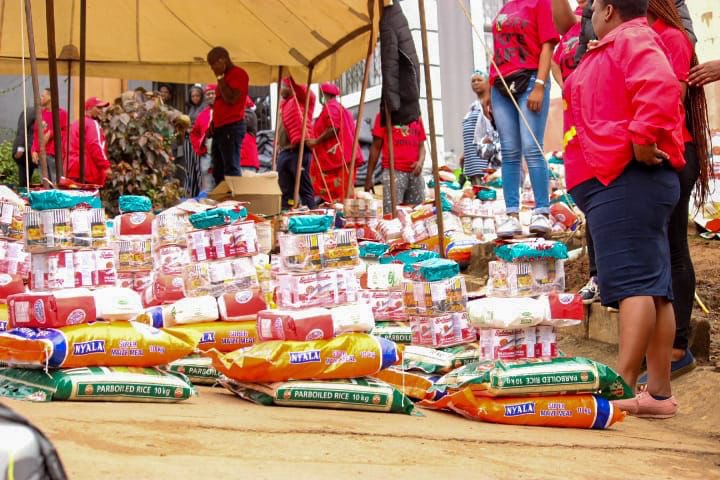 EFF donates blankets and food to victims of flooding in KwaZulu-Natal.
Image: EFF/Twitter

The EFF has donated blankets and food to victims of flooding in KwaZulu-Natal.

The party shared snaps on social media showing its members delivering food and blankets to those in need.

“We continue to call on our structures, public representatives and all South Africans to provide aid and relief for affected families.

“The EFF maintains that all its structures will continue to provide practical assistance,” said the party.

EFF SG @DlaminiMarshall was in Ward 54, eNhlungwane, Inanda, in EThekwini to offer relief to families affected by the KZN floods.

The EFF will continue to protect the dignity of black people at all material times.#ThankYouEFF pic.twitter.com/kqrO1kf2p8

EFF SG @DlaminiMarshall was in Ward 54, eNhlungwane, Inanda, EThekwini, giving hope to our people during this difficult time.

The EFF maintains that all its structures will continue to provide practical assistance.#EFFCares pic.twitter.com/fzGe2wQCI1

We call on our Structures, Public Representatives and all South Africans to provide aid and relief for affected families. #EFFPrays4KZN pic.twitter.com/wkDX2xaen4

We continue call on our Structures, Public Representatives and all South Africans to provide aid and relief for affected families. #EFFPrays4KZN pic.twitter.com/BRrz2FV0cQ

The move drew praise on social media, with many calling on other political parties and individuals to follow suit.

Click here to see how you can contribute to relief and rebuild efforts.

The donations come after the EFF lashed out at what it said was a delayed announcement by finance minister Enoch Godongwana on the R1bn which will be made available in response to the deadly floods.

443 people have died in the floods while about 63 people are still missing or unaccounted for.

“A sober state, at its very least, is expected to immediately intervene at the first announcement of severe weather conditions, given that responsive interventions save lives and provide practical support to communities and families,” said the EFF in a statement.

“Instead, the hyenas led by President Cyril Ramaphosa showed up days later for a straw mat photo shoot while scouting its next looting expedition.

“It is also worth noting that the SA National Defence Force who was deployed, harassed households and confiscated sanitary pads following the July 2021 civil unrest are only due to assist in the flooded province in the upcoming week.”

The EFF said any expectation that the R1bn in relief funds will actualise as relief is illogical.

“The recent lived experience of the R500bn Covid-19 relief fund that did not build a single new hospital is a point of reference. Instead, government dug 1-million graves in eager anticipation of our deaths.

“If this current government did not consider a pandemic worthy of it fulfilling its constitutional mandate, a natural disaster in one province certainly is of no significance to Cyril Ramaphosa.”

SA-born Hollywood actress Charlize Theron, who maintains ties with SA through her charitable work, has launched a fundraiser in support of flood ...
News
3 months ago

This was President Cyril Ramaphosa’s bold promise to sceptical South Africans fearing that the flood relief funds to be made available to ...
News
3 months ago

No room for corruption as government moves to rebuild KZN: Ramaphosa

President Cyril Ramaphosa has warned corruption hyenas salivating over the prospect of public money being disbursed to KwaZulu-Natal to rebuild after ...
News
3 months ago

An eThekwini ward councillor has apologised for swearing at a resident who asked for assistance after devastating floods wreaked havoc in ...
News
3 months ago
Next Article