Help, aid and support flooding in from all over says premier 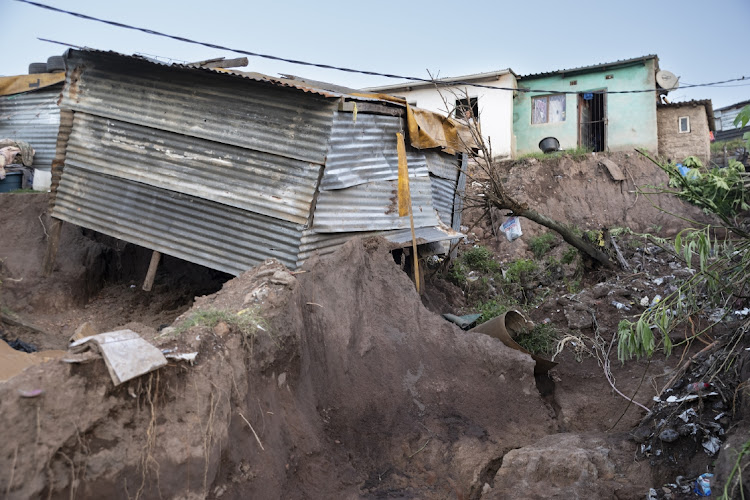 The mud came through this Lindelani home and took away the children of Vuyiswa Qwabe on Monday night. Her three children, 11-year old Lwandle, seven-year old Lusanda and three-year old Luyanda, whose body had still not been retrieved by late Thursday, died in the inclement weather that ravaged KwaZulu-Natal's coastal areas.
Image: Giordano Stolley

The death toll in the floods in KwaZulu-Natal has risen to 443, with an estimated 63 people still missing.

He said one rescue worker had suffered an episode while working in water, and though he had been rushed to hospital he had not survived. For now, he said, rescue teams were still in action.

While the total amount of flood damage, death and destruction experienced in KwaZulu-Natal in recent days is still not known, ongoing assessments, surveys and calculations are under way and costs are rocketing into billions.

So far well over 90% of bulk water supply has been restored in the province; soup kitchens, temporary shelters and beds are being set up; the health department has taken control of the mortuaries where 243 post mortems have been completed and 114 are still to be done by seven doctors working full time on this; 551 schools have been affected as well as 13,556 households.

Speaking at a comprehensive briefing on the disaster situation in the province, Zikalala said systems were being put in place, relief funds were being audited and all forms of looting of this money would be averted.

“We have learnt during Covid-19 and no maladministration, corruption or fraud will be tolerated. All funds will be used prudently and nobody will be allowed to use human suffering and misery to line their own pockets,” Zikalala said.

He added that total amounts could not yet be announced and quantifying efforts were ongoing. He said officials did not want to be “alarmist” in announcing the full extent.

For now, he said, a combined crew of 67 workers experienced in search and rescue were out on the ground and humanitarian assistance was coming in.

It was anticipated that bulk water supplies in the province would be fully restored by April 24. In the meant0.

0.ime, technicians were out to detect leaks, tankers were servicing areas without water and coastal areas were being restored, but water pressure was still low.

He said it was difficult to supply all affected areas with water tankers because of difficulties in navigating muddy roads and steep hills.

The largest sewage treatment plant in the province had been flooded but teams were working constantly to get it up and running again.

“Bulk supply pipelines have been damaged, so the department of  social development is supplying food parcels to those areas.”

He said each bereaved household would be given R1,900 for groceries, and that their funeral costs would be covered by policies taken out by both the provincial and national governments.

Zikalaka said some public hospitals had run out of water, and that cholera, diarrhoea and malaria were emerging as new threats. Temporary and mobile clinics were being sent to these areas during the disaster period.

He said officials were constantly monitoring the death count and bodies were being sent to mortuaries with available space.

“We are appealing to funeral conductors not to cause fear and panic and allow our forensic pathologists to do their work,” Zikalala said.

He added that of the 551 schools affected by the floods 98 were in need of mobile classrooms while others just needed cleaning and minor repair work. Urgent intervention plans would be unveiled when schools reopen.

Agriculture and rural development, he said, were reporting low harvests and a devastating impact on livestock — for which R1bn would be made available to assist farmers. He said 8,329 homes had been partially damaged and 3,987 houses had been completely destroyed. Projects to look at land for temporary relocations and temporary shelter were ongoing.

“Houses along the river banks have also been tagged for priority attention because those are where many have been affected,” he said.

Transport, roads and bridges remained affected, with many routes still unsafe for public use.

“Urgent work is under way to clean up, and most roads have been restored to at least single lane access,” he said, adding that while there were still some closures, these were isolated.

Damaged road infrastructure has been calculated at R5.5bn, which includes 1,369 infrastructure projects across the province. The SA National Defence Force had also deployed 10 teams to rebuild bridges.

He thanked other provinces around the country for their support and encouragement.

A KwaZulu-Natal man still cannot believe he survived the recent floods after his neighbour's house collapsed on him while he was sleeping.
News
2 months ago

A policewoman, as well as a police dog who had tried to save her, died on Sunday during a flood search and rescue operation.
News
2 months ago

Charity groups are rallying together to assist victims of the recent KwaZulu-Natal floods with vital provisions, including mattresses and potable ...
News
2 months ago