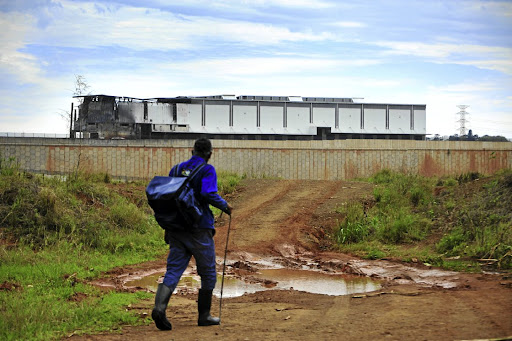 Firefighters battled the blaze for 10 days after it gutted the 14,000m² warehouse and burnt thousands of tons of chemicals. File photo.
Image: Theo Japhta

Chemical company UPL South Africa says it is taking measures after an overflow due to the heavy rain from its control dam where polluted water from the toxic spill during last year's unrest is contained.

The company's warehouse in Cornubia, north of Durban, was set alight during the unrest in July last year resulting in the chemical disaster.

“UPL repurposed an existing storm water control dam below the facility into a pollution control dam (PCD). UPL appointed independent specialists who have been carefully managing the levels of polluted water in the PCD.

“Testing had indicated that the recent levels of metals and contaminants of concern in the PCD were sufficiently low to permit a variety of discharge options, including slow release into the river environment,” said UPL spokesperson Japhet Ncube.

“The heavy rains over the weekend and continuing into last night [Monday] have, however, created an unprecedented volume of storm water in the PCD catchment, and its levels have rapidly risen from empty to extremely high.

“In response to this threat, UPL had resumed extraction to tankers and the specialist team implemented systems to reduce the volume of rainwater entering the PCD. Despite these interventions, due to ongoing heavy rainfall the PCD still overtopped  – water flowed over the edge.”

Ncube said UPL's specialists consider “that the storm water emanating from areas of the catchment at present is in such volumes that residual contaminants, already at low levels, will be extremely diluted.

“UPL’s consultants have advised that at those concentrations, they will be of minimal concern. Further, they will be diluted again when they mix with the tributary and river floodwater, and ultimately discharge into the sea. Analytical sampling has been undertaken and continues to be undertaken to verify these assessments.”

A road tanker was spotted floating in the Indian Ocean on Tuesday morning while heavy rain continued to batter KwaZulu-Natal, leaving death and ...
News
3 months ago

Dozens of skeletal remains surfaced following a mudslide which uprooted graves at Ntuzuma Cemetery, north of Durban, washing bones into the street.
News
3 months ago
Next Article