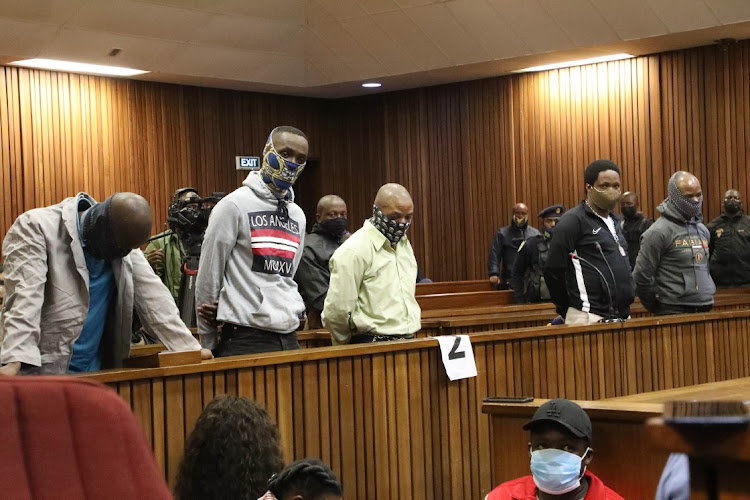 April 11 2022 The five men accused of killing Bafana Bafana star Senzo Meyiwa speak among themselves ahead of the beginning of their trial in Pretoria High Court.
Image: ANTONIO MUCHAVE

The trial against five men accused of killing soccer star Senzo Meyiwa hit yet another snag on Monday with one of the accused’s lawyers requesting a postponement, arguing that they have not had enough time to properly consult with their client.

Adv Zandile Mshololo, SC, for accused number five, Sifisokuhle Ntuli, told the high court in Pretoria: “The reason for not consulting with my client is because he has been kept in Kokstad prison which is far away from Durban where I have my chambers.

“When we made arrangement to come and consult, we were not allowed. Within the limited time we were given, it was difficult to make any arrangements further than that,” Mshololo said.

Both defence and prosecution informed the court last month that they would be ready for the trial.

Mshololo also complained that there were statements being withheld by the state and only received them late for her to consult with her client. “It is my further submission that the conduct by the state of withholding the statements violated accused number five’s constitutional rights to be given particulars and further particulars to enable him to prepare his defence case.

Nearly a decade after the killing of Bafana Bafana star Senzo Meyiwa, his murder trial is set to begin and hopefully bring his family much-needed ...
News
4 months ago

“Accused number five has just been ambushed by the conduct of the state to reveal such a crucial statement at the 11th hour. That conduct has violated accused number five’s constitutional right of a fair trial. He has been denied an opportunity to prepare his defence,” Mshololo said.

But prosecutor George Baloyi maintained that witnesses who made the statements requested that their names be not revealed as they feared for their lives.

Meyiwa was killed on October 26 2014 in Vosloorus, on the East Rand, at his girlfriend Kelly Khumalo’s home.

Khumalo is one of the witnesses that will testify in the matter. She is represented by her lawyer Magdalen Moonsamy who was present in court.

Journalists began broadcasting live from the court at the entrance as early as 6am.  Inside the court were  heavily armed police and correctional services personnel.

Among those in attendance was Meyiwa’s cousin Nomalanga Meyiwa and his sister Zama Meyiwa, who both sat quietly in the public gallery, just less than 3 metres from the accused.