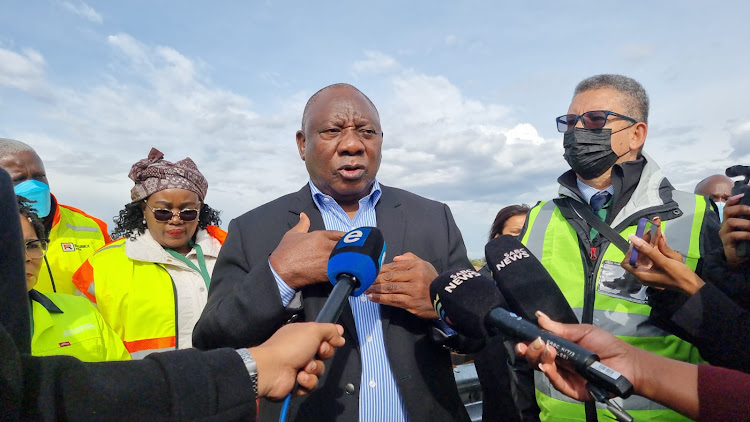 President Cyril Ramaphosa speaks to journalists before his imbizo in the Free State on April 9 2022.
Image: Amanda Khoza

“Obviously we cannot accept behaviour like that where people are hunted down in that way and are asked questions in that way about their own identity, because it takes us back to the apartheid way of doing things,” Ramaphosa said on Saturday.

“We are now in a democracy and we should be very restrained and respectful of the rights of people in our country.”

Ramaphosa was speaking to journalists before a presidential imbizo in Bloemfontein, and was asked about reports of police allegedly stopping foreign nationals and asking them to produce proof of their identity.

Zimbabwean man says he was saved from mob by speaking Sepedi

“Go diragalang? (what's happening?)” are two words that saved a Zimbabwean man from being killed by a mob that was raiding homes of suspected illegal ...
News
1 month ago

His comments came after rolling protests and the murder in Diepsloot north of Johannesburg on Wednesday of a Zimbabwean, Mbodazwe Elvis Nyathi, who was killed by a group going door-to-door demanding to check residents’ passports and identity documents.

“We regret the loss of life of a Zimbabwean and I am also pleased that the police, together with the minister, have been on the ground and have been stabilising the situation and there are investigations now under way,” said Ramaphosa.

“Of course we deplore any action that is taken against anyone to a point where they are killed.

“We continue to say that we should not take the law into our hands and we should not be targeting anyone in the way that people from other countries have been targeted because whatever we say, it no sooner becomes something that becomes xenophobic.

“As South Africans we should always be respectful to people from other nations, and whatever challenges we have we should use the law enforcement channels.”

It was a sombre moment for Godknows Nyathi as he was joined by other family members cleaning the spot where his brother was brutally burnt to death ...
News
1 month ago

WATCH | The man killed in Diepsloot was a father of four. This is his story

Elvis Nyathi, a 43-year-old Zimbabwean, was killed in a mob attack in Diepsloot on Wednesday night after a day of protest against crime and poor ...
News
1 month ago

The EFF says it will visit the family of Diepsloot mob attack victim Elvis Nyathi and ensure that justice is served.
News
1 month ago
Next Article