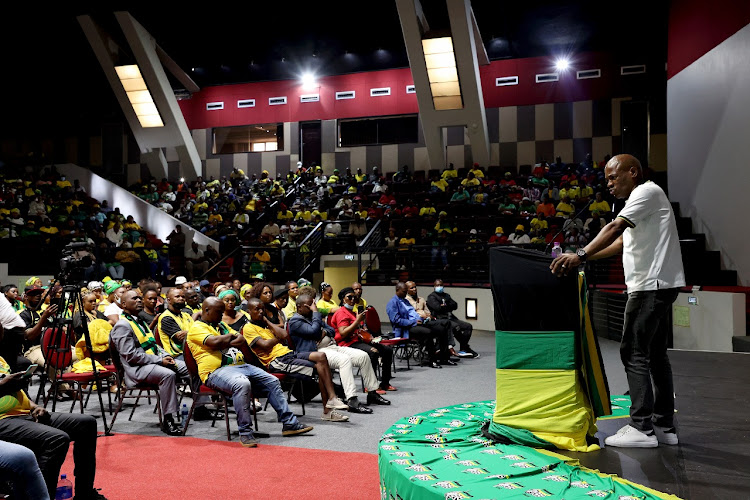 Factions vying for control of the ANC in eThekwini met separately in a show of force to consolidate their numbers ahead of the region’s elective conference which starts on April 8.

Those aligned to corruption accused Zandile Gumede gathered at Umlazi, south of Durban on Sunday, while those who support her opponent for the regional chair position,  Thabani Nyawose, were at the Olive Convention Centre.

Both factions claim to have the majority of branches on their side.

Speaking on behalf of Gumede’s supporters, Manqoba Shamane said they were meeting to establish factual numbers physically, a way of counting to establish their strength ahead of the conference.

“We have invited all branch delegates, we want to see our numbers in person because we don’t want to be misled by propaganda that says we are many. Today we will see if we are indeed many and if we are not, what to do,” he said.

ANC deputy president David Mabuza was not invited to the Mpumalanga elective conference that saw new leadership elected in the province.
News
4 months ago

Meanwhile at the Olive Convention centre Nyawose thanked his supporters for standing together since July 2019.

Nyawose implored delegates to vote during the weekend in a manner that will strengthen the ANC from inside.

“We are seen as an organisation that is fighting among itself. People say we are thieves — when we go to conferences we will either confirm that we are thieves or not but we cannot deny what is said by the public we claim to represent,” he said.

He said the ANC should not be dismissive of negative perceptions against it but rather introspect especially now that they have a chance to elect leaders.

He also emphasised that for the party’s renewal to be a success, members must embrace each other despite previous disagreements.

“We start correcting by bringing together the ANC, particularly those who have been bruised by leaders — that is who we must bring back when we talk about rebuilding and renewal. Let it be us who will humble ourselves and for the sake of renewal, let's make a call for all those comrades to come back to the organisation,” he said.

Nyawose suggested the ANC that will emerge from the weekend’s conference cannot unite different stakeholders and claim to be a leader of society without bringing its disgruntled membership together. “The ANC we are building will be the ANC of peace. Come back. We will not remind you of what you did 30 years ago.”

Mandla Ndlovu has emerged as the new Mpumalanga ANC provincial chairperson after receiving 440 votes our of 718 ballots cast.
News
4 months ago

He called on those gathered to hear him speak so that renewal could also start from within them.

“Renewal must start with each and everyone of us first — in your community how much damage have you caused to the ANC? That is how the true rebuilding and renewal should work. Before being called out by others you should self-introspect and answer that question by yourself,” added Nyawose.

He said the people of eThekwini want a humble ANC that is not defensive of its mistakes but will publicly acknowledge them and apologise.

“But those things start with all of us, from the branch leadership to the volunteers — they will not only be found at the regional executive committee level,” he added.

The conference will start on Friday.