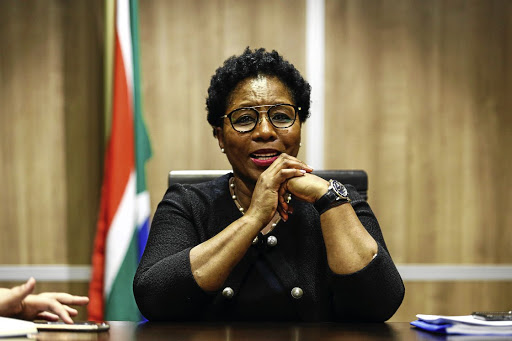 Public service and administration minister Ayanda Dlodlo is due to leave her cabinet post as early as next week. File photo.
Image: Moeletsi Mabe

Public service and administration minister Ayanda Dlodlo is due to leave her cabinet post as early as next week to take up a new job at the World Bank headquarters in Washington DC in the US.

This comes after Dlodlo, who has also served as minister in other portfolios including state security, communications and home affairs, bid farewell to her advisers and other department officials at a private function held at Melrose Arch in Johannesburg last night.

Also in attendance were heads of public entities linked to Dlodlo’s ministry such as the Public Service Commission, the National School of Governance, the Government Employees Medical Scheme, and the Centre for Public Service Innovation..

This comes on the back of a Sunday Times report last month that Dlodlo was headed to a position at the World Bank. At the time, senior government officials said Dlodlo was expected to assume the position of executive director representing the three African seats on the 25-member board of the institution.

Approached for comment, Moses Mushi, spokesperson of the department of public service and administration, said he could not comment, citing the prerogative of President Cyril Ramaphosa to make announcements about resignations and appointments of ministers.

Dlodlo was not available at the time of publication. Her comment will added to this story as soon as obtained.

Dlodlo was initially expected to leave in January but her move had been delayed.

It is understood she was also waiting for Ramaphosa to announce her departure from his cabinet.

Insiders last month indicated that the move to the US had been delayed due to strategic meetings her department had scheduled for March and early April. These include a national indaba on “the future of work and public service” held in March.