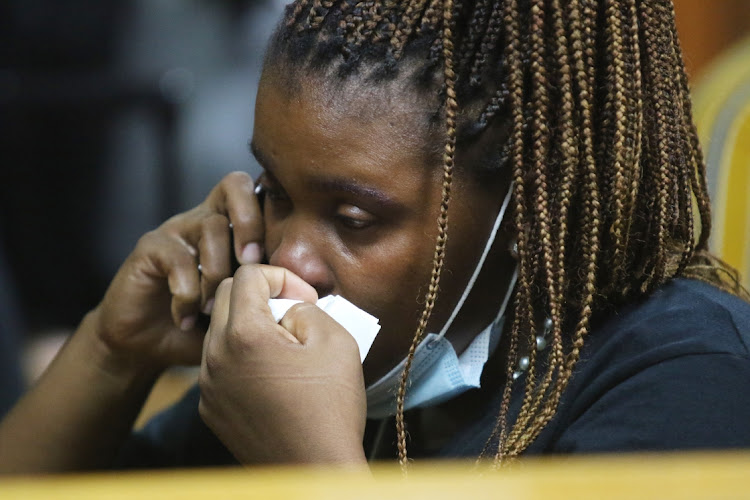 Sibongile Mani reacts as she gets five years’ jail time following charges of theft after she ‘overspent ’ her NSFAS money that was ‘mistakenly deposited to her Intelimali card’.
Image: MICHAEL PINYANA

Walter Sisulu University student Sibongile Mani’s attorney said on Wednesday the East London regional court was mistaken to find her guilty of theft, and the sentence of five years meted out was wrong.

With Mani, 31, in tow, attorney Asanda Pakade addressed the media outside the court after the sentencing.

Mani, a mother of two, broke down in tears along with her supporters in the court gallery when magistrate Twanett Olivier handed down the sentence.

Olivier convicted the honours degree student on February 7 of theft of more than R818,000 after R14m was deposited into her account in error by Intellimali on behalf of NSFAS.

The amount should have been R1,400. She immediately started spending the money.

After the sentencing,  Pakade submitted an application for leave to appeal against both Mani’s conviction and sentence. Mani’s bail was extended.

Outside court Pakade said the sentence was “shocking”.

“To us her being found guilty does not make sense. Hence we say the high court will definitely come to a reasonable conclusion of this matter and we are ready for that. We are going forward with this case.

“We are very confident that her conviction and sentence is wrong. The sentence is shocking to say the least. It’s still going to be a long journey but we are well prepared for it,” Pakade said.

The appeal will not go unchallenged. NPA regional spokesperson Luxolo Tyali said they were “glad justice had been served”.

“The sentence is long but we have achieved what we wanted to achieve. We are ready to oppose an appeal because we believe this sentence is appropriate and fits the crime.

“Dishonesty is a very serious offence, especially in this case where monies that were meant for students ended up being spent on lavish things by a person who was supposed to be responsible.

“She should have appreciated the wrongfulness of her actions in using money which was meant for the poorest of the poor.”

Tyali said Mani would be considered eligible for correctional supervision after serving a third of the five-year sentence — or 20 months.

“The department of correctional services will be the body to determine whether she is fit for such a dispensation.”

In an hour-long sentencing, Olivier said “offences of this nature” were tightening their grip in SA and threatening the wellbeing of the people.

“It eats away at the ethical fabric of our society and stifles economic growth. Should these offences go unpunished, they will pose a serious threat to our democratic state.

“Even now, so many questions remain unanswered. It remains unanswered as to what happened to the luxury items ... You have been silent on this. You have not taken the court into your confidence by stating what was done with these items or even if they still exist.

“The court has been referred on numerous occasions to your poor background and upbringing, and I’m sure everyone has sympathy for that, but that is the life of just about every South African in this country.

Sibongile Mani, the WSU student has been sentenced to five years in jail for the theft of more than R800 000 in NSFAS funds.
News
4 months ago

Those were conscious decisions you took every day. You were set up in a perfect position to further your studies until you made that decision

“You were given the benefit of studying at Walter Sisulu University. You were a beneficiary of food allowances in 2016 and 2017... It cannot be said that at the time of the incident you were a victim. You had risen above your personal circumstances.

“I’m mindful of the fact that funding comes directly from taxpayers’ pockets. You made the decision [to spend the money] on June 1 2017 and you did so repeatedly for 76 days consecutively, numerous times a day.

“The fact that you were charged with one count of theft — if you really consider and look at the facts, each time you decided to issue a voucher ... to spend as much money on any given date shows that you were rushing against time to spend the maximum amount before it was brought to a halt.

“Those were conscious decisions you took every day. You were set up in a perfect position to further your studies until you made that decision.

“If Intellimali had not repaid this funding, 585 of your fellow students would not have received their monthly food allowances and that [would have been] a direct consequence of your conduct.

“The credit list appears that it was not items of need that you bought; it was luxury items inspired by greed. The manner in which the offence was executed is aggravating.”

Olivier postponed the case to April 11 for the presence of state prosecutor, advocate Luthando Makoyi, and to evaluate the position of the hearing.

“We feel that justice has not been served as we had expressed before that Sibongile was not the only one who should have been prosecuted.

“We accept the decision from our legal team to seek to appeal the sentence and conviction. We are still hoping for a suspended sentence. We feel like she is being used as a scapegoat.”

“We will continue support Sibongile. We hope the new prosecutor will be addressed in the appeal. The system is anti-black and seeks to oppress black people, hence we should fight the system.”

Intellimali, NSFAS and WSU had not responded to inquiries at the time of writing.

The attorney for convicted Walter Sisulu University student Sibongile Mani made an impassioned plea for his client to be given a suspended sentence.
News
4 months ago

The fact that the funds spent by Mani were deposited into her account does not absolve her from legal liability for having unduly spent money she ...
Opinion
4 months ago

Walter Sisulu University student Sibongile Mani, who erroneously received more than R14m in her student account from the National Student Financial ...
News
7 months ago
Next Article