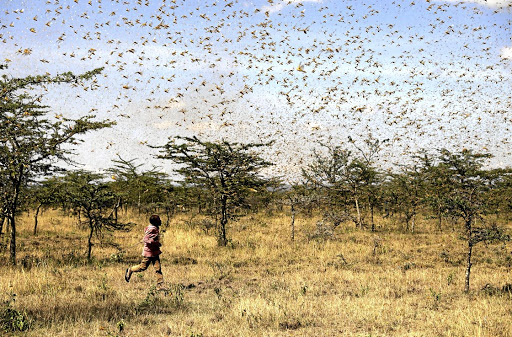 A child tries to fend off a swarm of desert locusts on a farm near the town of Nanyuki, Kenya. Phumzile Mlambo-Ngcuka says climate change is deepening poverty.
Image: Reuters/Baz Ratner

The global pandemic has thrown 100-million people into extreme poverty — an issue the Global Citizen Foundation is planning to address with its End Extreme Poverty NOW campaign.

Former executive director of UN Women Phumzile Mlambo-Ngcuka is among the many voices crying out for support and advocating for commitments from the most powerful governments, private sector leaders and billionaires.

“There is now massive unemployment and women are disproportionately affected,” she said at the launch of the campaign on Tuesday.

“Many women between the ages of 20 and 30 have lost their jobs because they have had to look after their families and children. And climate change is leading to climate refugees as people leave their homes in search of food or work — even going to other countries.”

This, she said, was leading to deepening poverty.

“In just the past few weeks, more than 2-million people lost their jobs and homes in the Ukraine. Many people are now destitute in Yemen, Syria, Somalia and South Sudan.”

Mlambo-Ngcuka called for people to take action and for an end to the hoarding of vaccines by rich countries.

The End Extreme Poverty NOW campaign aims to empower young women, bring about an end to “the twin evils of healthcare injustice and financial inequity” and by directing significant climate adaptation resources to rural communities and smallholder farmers.

Supporters of embattled former eThekwini mayor and corruption-accused Zandile Gumede claim she is leading the pack in the race for the hotly ...
News
1 month ago

Scores of people supporting Operation Dudula were turned away when they gathered in Durban on Sunday, unaware that the KwaZulu-Natal launch of the ...
News
1 month ago
Next Article