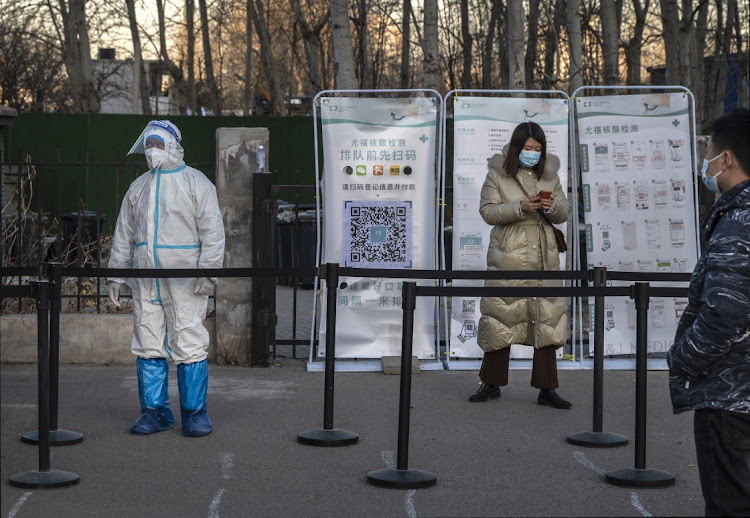 China has stepped up its testing and implemented hard lockdowns in several areas amid a surge in Covid-19 infections.
Image: Kevin Frayer

Several sources, including the World Health Organisation (WHO), have expressed concern about the increase in Covid-19 infections in China and parts of Europe over the past two weeks, attributing it to a “stealth Omicron” variant of the coronavirus.

After largely keeping Covid-19 at bay for almost two years with a zero-tolerance approach, China is in its worst wave of infections since the initial outbreak in Wuhan in 2020.

Reuters reported state television had put Shanghai’s daily infections at 1,609 cases, a jump of more than 60% in a single day. Areas in the country have been put under hard lockdown and businesses closed or operations temporarily moved to other areas.

The BA.2 sub-variant, or “stealth Omicron”, is also reported to have been detected in outbreaks in Europe.

Early studies suggested the variant may be more infectious than other Omicron variants but doesn’t necessarily lead to more severe illness.

“BA.2 differs from BA.1 in its genetic sequence, including some amino acid differences in the spike protein and other proteins. Studies have shown BA.2 has a growth advantage over BA.1.

“Studies are ongoing to understand the reasons for this growth advantage, but initial data suggest BA.2 appears inherently more transmissible than BA.1, which remains the most common Omicron sublineage reported.

“This difference in transmissibility appears to be much smaller than, for example, the difference between BA.1 and Delta,” the WHO said last month.

In a recent report, the organisation said the BA.2 has been “increasing relative to BA.1 in recent weeks, and is the predominant Omicron lineage in several countries”.

Experts believe an annual Covid-19 vaccination would be preferable to more frequent booster shots to fight the pandemic.
News
4 months ago

Will my proof of vaccination be enough for entry into SA?

All travellers entering South Africa from this week will have to show proof of vaccination or a negative PCR test not older than 72 hours.
News
4 months ago

Can the vaccine cause ringing in my ears?

While there have been anecdotal accounts of people developing a ringing in their ears, or the ringing becoming more severe, after taking the Covid-19 ...
News
4 months ago

Do I have to disclose to my boss if I am vaccinated?

The labour department published new legislation this week, strengthening employers powers to require their workers to disclose their vaccination ...
News
4 months ago
Next Article