DA takes aim at Nathi for 'sleeping' in parliament 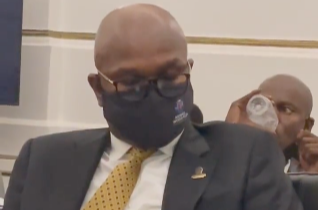 The debate focused on entrenching the culture of human rights in the fight against racism, xenophobia and related intolerances.

Schreiber shared a video of Mthethwa, saying: “Here is a member of [President Cyril] Ramaphosa’s poverty cabinet, Nathi Mthethwa, fast asleep during a session of parliament.

“The DA’s motion of no confidence in this cabinet has never been more urgent.”

Here is a member of Ramaphosa’s Poverty Cabinet, Nathi Mthethwa, fast asleep during a session of Parliament. The DA’s Motion of No Confidence in this Cabinet has never been more urgent. pic.twitter.com/JV9XQuEFOg

According to Schreiber, Mthethwa fell asleep again after an hour. “An hour later and he’s fallen asleep again. The perfect metaphor for Ramaphosa’s cabinet.”

Attempts to obtain comment from Mthethwa’s spokesperson Masechaba Khumalo were unsuccessful at the time of publishing this article.

He said the attack was “stupid and self-hate” and called on South Africans to show ubuntu.

“Today, let’s call on all South Africans to recall their ubuntu. The attack on Dr Mahlangu was stupid and self-hate. I spoke to her earlier and she is strong. All of us, as MPs, must have her in our thoughts and prayers.”

The attack on Dr Esther Mahlangu yesterday was stupid and self-hate. We call upon all South Africans to recall their Ubuntu.

This was the preamble to the contribution I made during the debate on Human Rights Day in @ParliamentofRSA pic.twitter.com/7EUXWHS235

No place for old MPs in parliament - ANCYL

The ANC Youth League in Mpumalanga has vowed not to nominate "old people" for parliament.
News
3 years ago

Five excuses Zuma could give for sleeping during Gordhan's speech