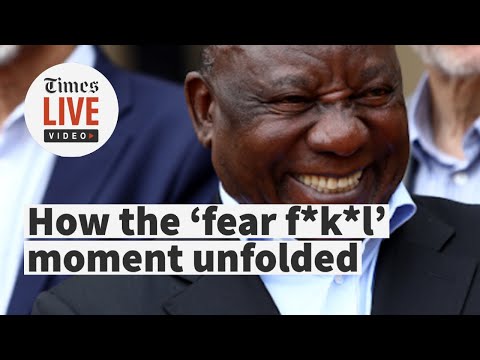 During a bizarre moment in a question-and-answer session in parliament on Thursday afternoon, President Cyril Ramaphosa said he fears 'f*k*l' during an answer to a question from EFF leader Julius Malema.

Malema had asked if Ramaphosa was scared of police minister Bheki Cele.

“What is it that you are so scared of honourable Bheki Cele so much that you are prepared for us to die like flies because you want to satisfy political expediency?” asked Malema.

Ramaphosa shocked MPs and South Africans alike when he answered, “Honourable Malema, I hear what you are saying but I fear f*k*l.”

About 15 minutes later the UDM's deputy president, Nqabayomzi Kwankwa, rose on a point of order and said, “I had to find out from first-language Afrikaans speakers here whether the word f*k*l is parliamentary. They confirmed it is indeed not parliamentary,” he said.

“It will be a sad day if the word 'f*k*l' enters the lexicon of parliament because the president used it here. MPs would use it in the future and the speaker will not be able to call them to order.”

Ramaphosa stepped in and withdrew the word. “I shouldn't have said that”, said a laughing Ramaphosa. “Cancel it and maybe just say I said 'niks' — 'niks' is an Afrikaans term as well so I withdraw [f*k*l].”