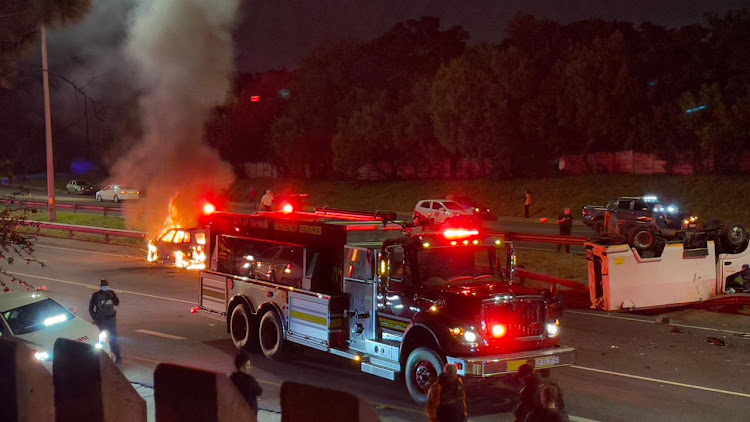 Two people believed to be security guards were injured during the heist.
Image: Supplied

Gauteng police are searching for about 12 suspects who robbed a cash in transit (CIT) vehicle on the N4 near Watermeyer, Pretoria, on Thursday evening.

Two people believed to be security guards were injured during the heist.

Tshwane emergency services spokesperson, deputy chief Charles Mabaso, said one patient was transported to Mediclinic Meulmed in a moderate to serious condition, and the other patient was airlifted to Milpark Hospital in a critical condition.

Police spokesperson Col Robert Netshiunda said the CIT vehicle was reportedly driving from Modimolle to a cash depot in Silverton when the incident occurred.

“A shootout is said to have ensued between the suspects and the guards, but no gunshot injuries were reported.

“Two of the suspects' five getaway vehicles caught fire at the scene.

“The driver of the cash truck and his crew were injured and rushed to hospital,” said Netshiunda.

Mabaso said on arrival at the scene, they found three vehicles on fire, including the CIT vehicle.

“Paramedics were treating two male patients reported to be security officers for injuries which included facial burns,” he said.

He said firefighters managed to extinguish the vehicles.

“Anyone with information about the whereabouts of the suspects is urged to contact the nearest police station or call our crime stop number 08600 10111 or through the MySAPS App which can be downloaded on any smartphone,” said Netshiunda.

R1m reward for information on robbers who killed guard in Centurion

G4S Cash Solutions is offering a reward of up to R1m for information leading to the successful arrest, prosecution and conviction of criminals who ...
News
5 months ago

Violent criminals and illegal firearms are being taken off the streets by a dedicated team working to combat cash-in-transit heists, says police ...
News
5 months ago
Next Article