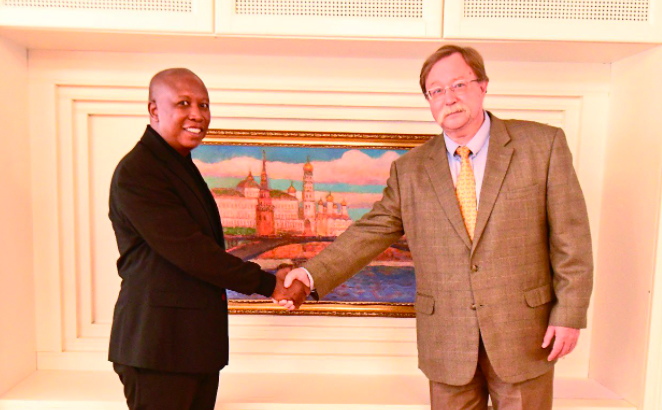 “There is nothing wrong with Russia protecting its territory.”

So says the EFF after meeting the Russian ambassador to SA Ilya Rogachev in Tshwane, on Wednesday.

EFF leader Julius Malema led the delegation and claimed the party received “first-hand information on the ongoing military operations in Ukraine” from the embassy.

“We must deepen meaningful ties with Russia economically against the Nato war alliance,” the EFF said after the meeting.

We met with the Ambassador of the Russian Federation in South Africa, Ambassador Ilya Rogachev, in Tshwane today. We received first-hand information on the ongoing military operations in Ukraine from the embassy, not from neo-Nazi propagandists. pic.twitter.com/Bu6K29kLJO

We must deepen meaningful ties with Russia economically against the NATO War Alliance! pic.twitter.com/OsnIvW4san

In a statement, the party said it learnt some interesting “facts” about the conflict during the meeting, alleging the West has an overriding agenda against Russia.

“Many Western countries are wholly isolating, banishing, and discriminating against Russian citizens,” said the party.

“The EFF is convinced that there is absolutely nothing wrong with the Russian Federation averting what is a patent and clear security threat to Russian territory and people by Nato forces, and particularly the US,” it said.

The party also expressed dismay over the sanctions imposed on Russia.

“The EFF condemns the sanctions imposed on Russia and calls on all progressive forces of the world to increase their trade relations with Russia to decisively avert the impact of these sanctions,” said the EFF.

The party’s comments come as the International Court of Justice (ICJ) ruled against Russia and ordered it to cease military actions in Ukraine immediately.

“The Russian Federation shall immediately suspend the military operations that it commenced on February 24 on the territory of Ukraine,” the ICJ said in its judgment.

Though the court’s rulings are binding, it has no direct means of enforcing them and occasionally countries have ignored them in the past.

Meanwhile, Ukrainian President Volodymyr Zelensky delivered a virtual address to members of the US Congress on Wednesday, calling for more aircraft and air defence systems.

“Russia has turned the Ukrainian sky into a source of death. I need to protect our skies,” he said.

Should SA get involved in the Ukraine and Russia conflict?
Next Article