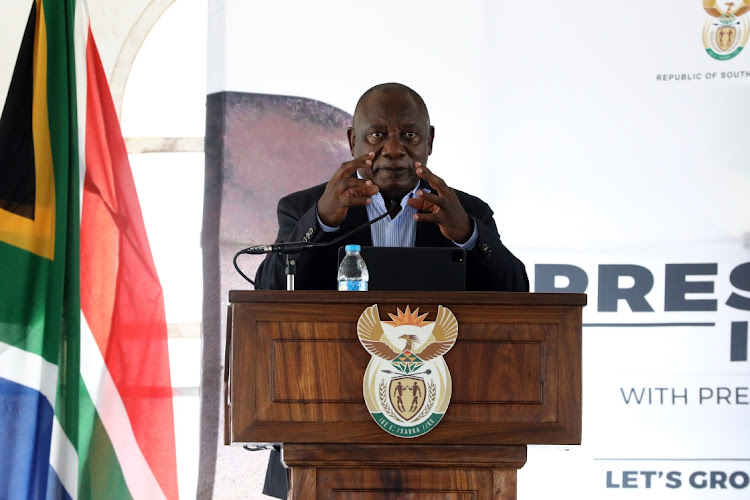 President Cyril Ramaphosa’s inaugural presidential imbizo at the weekend was characterised by pleas and promises.

Community members from surrounding areas in the Ngaka Modiri Molema district in Mahikeng gathered in a marquee at the Mmabatho stadium, hoping to get a glimpse of SA’s first citizen. More importantly, they desperately wanted to be heard.

What began as a structured way of raising issues almost resulted in a stampede when  frustrated residents fought over the roving microphone, pushed one another and screaming for attention because they wanted to speak to Ramaphosa.

One resident, Mmabatho Moanakwena, begged and pleaded with Ramaphosa and co-operative governance and traditional affairs minister Nkosazana Dlamini-Zuma to provide her with a tractor so t she can farm her 46 hectares of land.

“I am here to ask for a tractor. I have 46 hectares of land, I have water. Please help me. I am begging Mr President, please help me.”

Another resident told Ramaphosa Mahikeng was a shadow of its former self.

“Welcome to the ghost down Mr President.”

Reading out her list of demands, the woman reminded Ramaphosa of the pledges made during his state of the nation address in February.

Other issues raised related to schools, clinics, potholes, unemployment, crime, housing and lifting the section 100 administration in the province.

IN PICTURES | Ramaphosa arrives in Mahikeng for North West imbizo

As the queue grew longer, some community members became restless while others pushed and screamed at those holding the microphones. As the frustration grew, so did the push to be right in front of Ramaphosa.

Police were called in to restore order in what almost resulted in a stampede.

After hours of listening, Ramaphosa asked his ministers to respond to the more than 30 concerns raised during the session.

Calling transport minister Fikile Mbalula to the stage, he said: “The roads here are quite bad. The potholes are as big as swimming pools, especially in town.”

Mbalula promised the community they will soon be fixed.

“They cannot only be fixed when the president is in town and then when he leaves, you don't care. The closing of potholes is something that can generate job creation because they always need to be repaired,” he said.

Ramaphosa said the visit was a process of strengthening the capacity of the state and making sure the work gets done.

Police minister Bheki Cele said he was going to make sure officers are trained to deal with gender-based violence (GBV).

“Their job is to arrest. We have trained 900 officers to sit at the GBV desks at  police stations so they develop understanding, empathy and sympathy for victims as they come to the police stations.”

While human settlements minister Mmamoloko Kubayi again cautioned the community about selling their RDP houses and handing over their title deeds as security, minister of agriculture, land reform and rural development Thoko Didiza told Moanakwena that having a bigger tractor may not be the answer.

She told Ramaphosa: “We are attending to her matter.”

Addressing water challenges in the province, minister Senzo Mchunu said while in some areas infrastructure was dysfunctional and others needed boreholes, “water is a life right and without that life comes to a halt.”

Mchunu provided an update of every intervention in the province to stabilise its water supply.

She said her department was finalising a date for a military veterans imbizo which will address issues of registration, verification and beneficiaries.

Social development minister Lindiwe Zulu also promised to return to the province to focus on ensuring the elderly are safe.

“In three weeks’ time we will be coming back but it will be about strengthening the capacity of the people who live here.”

Tourism minister Lindiwe Sisulu said her department would work on attracting tourists into the province by reviving industry after the devastation caused by the Covid-19 pandemic.

President Cyril Ramaphosa will meet North West residents on Saturday as part of a post state of the nation address presidential imbizo, his office ...
News
3 months ago

“Councillors, starting with the DA, ANC and all of them, abuse the EPWP., We have to deal with corruption.”

Minister in the presidency Mondli Gungubele told the community plans were afoot to revamp the presidential hotline and assured residents that letters to the president will receive responses.

“We have a group of people who are supposed to be dealing with letters. We are not happy with the way the work is being done.”

He said after analysing the presidential hotline, “it’s in the hospital. We are rehabilitating it by digitising it”.

Dlamini-Zuma assured the community that government was ready to lift the section 100 administration in the province.

In his closing remarks Ramaphosa called for an end to corruption in municipalities.