No joy for passengers as Comair flights suspended 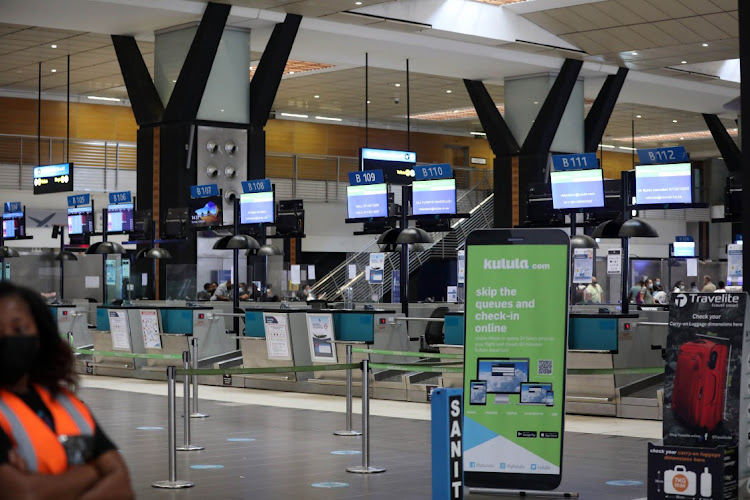 Aircrafts operating at OR Tambo international had to take care of hundreds of stranded passengers after Kulula.com and British Airways were grounded.
Image: Antonio Muchave

As ComAir was grounded indefinitely on Sunday after safety concerns raised by an airline regulator, stranded passengers were dealt another blow as flight prices skyrocketed.

Flights leaving OR Tambo International Airport for Durban and Cape Town went from a reasonable R900 and peaked at R3,000 as demand increased on Sunday.

Safety concerns on Comair-operated Kulula.com and British Airways flights prompted the SA Civil Aviation Authority (Sacaa) to indefinitely suspend their operations across the country after a series of midair emergencies.

Comair can appeal against the suspension.

Sacaa said the suspension would remain effective pending the operator addressing issues it had flagged.

The regulator said it recognised efforts by Comair to address the issues as speedily as possible.

As stranded passengers walked from counter to counter trying to find alternative flights, others tried to make alternative travel arrangements as the price surge meant they could not afford to book other flights.

Samukelisiwe*, who was supposed to board a 9.40am flight to Durban said she had received an SMS informing her the flight was going to be late.

She said Kulula.com staff at the check-in counter informed her to find alternative flights and also gave her a number to call and an email address for a refund but nobody answered the phone.

“The problem is that other flights are fully booked. Airlink is still available but it is going to Pietermaritzburg at R2,200. Flights for tomorrow morning are all sold out. The only flight that is available is the one leaving at 9am, which is costing R3,000, which is ridiculous,” Samukelisiwe said.

She said she was forced to book a bus that was departing from Midrand at 7pm and would arrive in Durban in the early hours of the morning, and she would be able to get to work on time.

Samukelisiwe was in Johannesburg to fetch her driver's licence as she works between the two cities.

Nana* of Polokwane, Limpopo, who was scheduled for a two-week training course in Durban that starts pn Monday sat peacefully next to Samukelisiwe, deep in thought.

The flight scheduled for 9.40am was her first flight.

“I have informed my bosses and I secured another flight from my own pocket, which is leaving at 7pm for R1,100.

“It is my first time going into a flight. It is a very bad experience that I have had here. It is unfortunate for me. I had a very bad first trip in a flight. Can you believe it? What if I did not have any cash? What would have happened? I would have had to find accommodation.”

Sowetan’s sister publication, Sunday Times, reported that on February 10, shortly after taking off from Lanseria in Johannesburg for a flight to Cape Town, one of the two engines failed on a Kulula Boeing 737-800. The pilot issued a mayday call and the plane and its 157 passengers landed safely at OR Tambo.

Ten days later, British Airways flight BA6252 had to make an emergency landing at King Phalo Airport in East London shortly after it had taken off for Johannesburg.

The airline said the landing gear had failed to retract. Eastern Cape premier Oscar Mabuyane was on the flight.

While passengers were running around in desperate attempts to get flights, Kulula.com staff had bigger problems – an uncertain future.

Sowetan spotted the workers at the viewing deck sitting on the ground. Some fiddled with their phones, while others chatted among themselves.

“We don’t know what is going to happen. To be honest, we don’t know if we still have our jobs. All we are hoping for is the best. They have not told us anything about tomorrow. We don’t know whether to report for duty or not,” said one of the workers.

By midday, Sacaa released a statement that Comair's suspension followed an inspection visit by the regulator to the operator to determine the cause of a spate of occurrences affecting a "concerning" number of flights operated by Kulula and BA Comair.

Comair said it was not in a position to say what the cost implications were.

All flights operated by Comair have been grounded by the SA Civil Aviation Authority, the company said on Saturday.
News
4 months ago