Nine bust for tampering with essential infrastructure in KZN 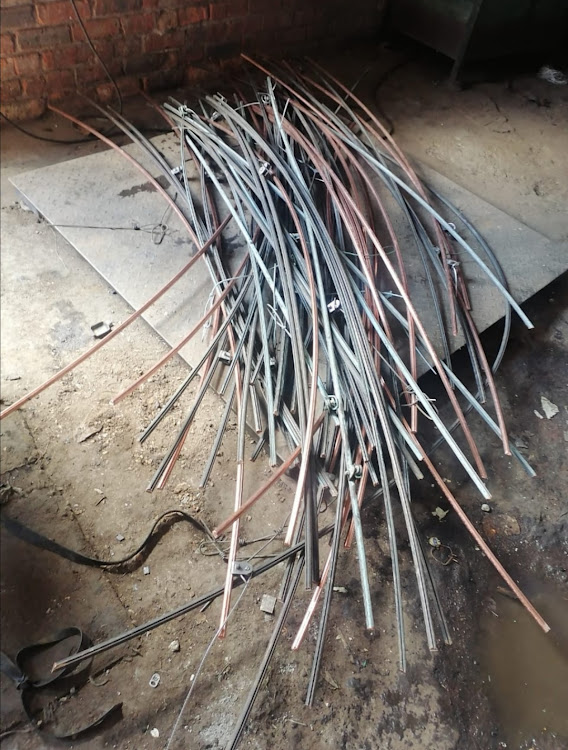 Some of the copper cables seized near Newcastle on Saturday.
Image: Supplied

A KwaZulu-Natal man allegedly caught cutting overhead railway cables has led to the arrest of eight others and the seizure of 180kg of stolen copper cable.

Police spokesperson Lt-Col Nqobile Gwala said police from Charlestown, near Newcastle, were on patrol on Saturday when they spotted a “suspicious person” at a Transnet tunnel in the area.

“The police went to investigate and were joined by security officers.

“The suspect was seen cutting overhead rail cable from the line within the tunnel.

“The suspect was placed under arrest for damaging and tampering with essential infrastructure.

Gwala said the men, aged between 28 and 43, will be profiled “to check if they are linked to similar cases reported in Charlestown and surrounding areas”.

“They are appearing before the Newcastle magistrate's court on charges of tampering with and damaging essential infrastructure. The matter will be investigated by the Hawks.”

Fifty steel railings were stolen from two popular Durban piers, apparently without anyone noticing their removal.
News
3 months ago

The City of Cape Town’s metal theft unit made 132 arrests during the first six months of the current financial year.
News
3 months ago

The rampant criminality is exacerbating localised power cuts and the implementation of load-shedding, says Eskom.
News
3 months ago

Gauteng sets aside R36bn to build and maintain public infrastructure

Gauteng government has set aside R36bn for infrastructure projects in the province over the next three years.
News
3 months ago
Next Article