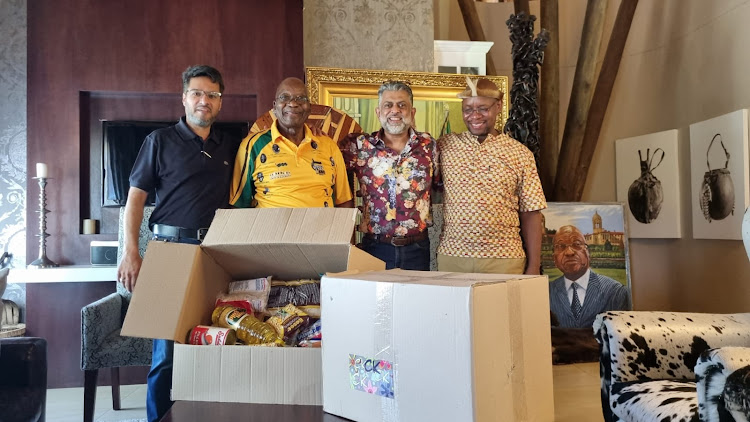 FOOD HAMPERS: Imraan Vally, director of CK Tobacco, former president Jacob Zuma, Yusuf Kajee and Edward Zuma in Nkandla with some of the food to be distributed.
Image: Supplied

Kajee said his visit was to arrange food hamper distribution in the region.

“We met to hand over a sample of the food hampers we are planning on providing to the destitute and needy in the area. We plan to hand out 1,000 hampers, which will be distributed in the Nkandla region over four weeks. Each hamper can cater for a family of four for at least a month.”

He said there was no hidden agenda regarding their visit.

Kajee said Zuma was in good spirits and his jovial self.

“Baba was looking good. He was happy to see us and to hear of what we were planning to do in the area. He was all smiles, as usual, despite everything going on around him.”

Kajee previously told SowetanLIVE sister publication Sunday Times Daily he supported Zuma because of what he did for people of colour in the country. He said Zuma was loyal and had never betrayed his comrades.

“He kept our heritage, he allowed us to trade freely — if the Mbekis had their way, if the Essop Pahads had their way, we’d be working all our lives for the white man. Has he [Zuma] ever ratted someone out? If he starts talking he would take down more than half of the ANC and that cannot happen.”

Edward Zuma said : “He came to see us. There was nothing sinister about his visit. We go a long way back.”

Three KwaZulu-Natal businessmen have pledged R2m to help the families who lost belongings in a fire which ripped through a block of flats in the ...
News
1 year ago

It has been constantly revealed over the years that a number of his immediate family members used his political clout to clinch business deals.
News
4 years ago

'Zondo failed to prove Zuma was captured by the Guptas', says Foundation

"Acting chief justice Zondo has failed to prove that [former] president Zuma was captured by the Guptas as originally intimated by former public ...
News
5 months ago
Next Article