Federation insists that state intervention should drive the making of a developmental state, not the private sector 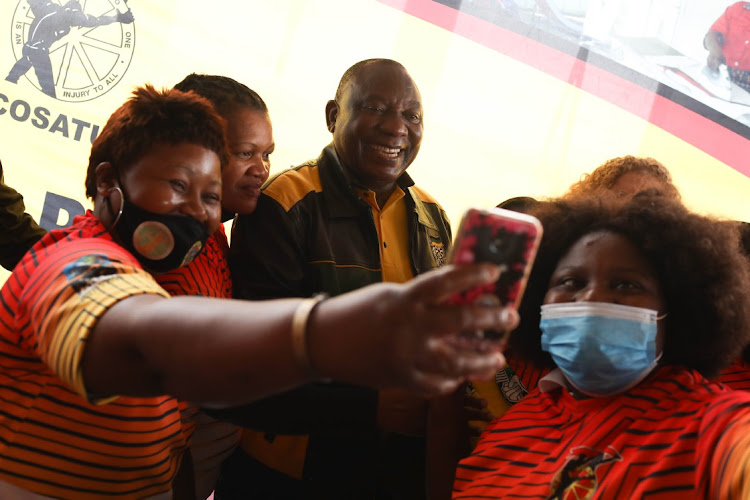 Domestic workers and members of Cosatu take selfies with President Cyril Ramaphosa in October 2021 at a Cosatu event in Ekurhuleni. Relations between the union federation and the president have cooled over the past few years.
Image: Alaister Russell

This emerged in a statement laying out the outcomes of the trade union federation’s central executive committee (CEC) meeting held from Monday to Wednesday.

After Ramaphosa caused a political traffic jam for stating in the state of the nation address (Sona) that it was not government that creates jobs but rather the private sector, Cosatu said it disagreed with him.

The federation's highest decision-making body expressed concern about the economic trajectory the country was taking, saying the administration was elevating the role of the private sector instead of taking a state-led approach.

“The federation raised concerns that the existing dominant market-driven logic in the state continues to retard the realisation of the vision of a developmental state.

“Even progressive elements of the new administration’s agenda remain relatively timid when it comes to questions such as direct state intervention in the economy, state economic ownership, action against monopolies.”

A good news budget in which the government commits more spending towards job creation and social relief of distress is what economists are expecting ...
News
5 months ago

According to Cosatu, there was incoherence in the Ramaphosa government’s economic development approach, which they find problematic as it appeared to be tiptoeing on issues in order not to upset big business.

“Arguing that the private sector knows best despite the evidence to the contrary is sowing confusion,” it said. “The exaggerated fear of alienating capital has meant that government has adopted the posture of ‘enabler’, and at best ‘regulator’, to provide the space for capital to operate.

“Because the posture prevents the state from transforming the environment, this results in capital reproducing essentially the same relations of exploitation and domination inherited from the apartheid era; where these relations have shifted, they have obviously endeavoured to reproduce them on favourable terms under the new conditions.”

The CEC said it was not pleased at the slow pace or non-implementation of economic resolutions taken at the ANC national conference in Nasrec almost five years ago.

It said the National Treasury and other centres of state power were hell-bent on entrenching economic postures that were declared problematic in Nasrec.

Cosatu has been instrumental in Ramaphosa’s rise to the highest office in the land, having been among the formations that endorsed him and campaigned for him before the ANC 2017 Nasrec conference.

Their support of his administration has in large part been a friendly one but that seems to be changing.

With the latest jostling about the economic direction that the country is taking, it remains to be seen on whether the federation will throw its weight behind Ramaphosa heading to the ANC December conference where he will be seeking a second term.

But Cosatu’s ultimate attitude towards the president is likely to become clearer at their congress billed for September this year.

The federation also reiterated that it remained steadfast in its opposition to the unbundling of Eskom, which it believes will lead to the privatisation of the power utility and job losses.

“We therefore demand that the corporatisation of Eskom and current attempts to privatise its assets be stopped.”

Organised labour has largely expressed disappointment with finance minister Enoch Godongwane’s maiden budget speech despite it being commended as ...
News
5 months ago

Treasury DG Dondo Mogajane joined a TimesLIVE webinar hosted by Eusebius McKaiser in which he spoke about how the latest budget is trying to support ...
News
5 months ago

A R182bn tax revenue collection windfall has given the government wiggle room to make additional allocations to the public wage bill and the ...
News
5 months ago
Next Article