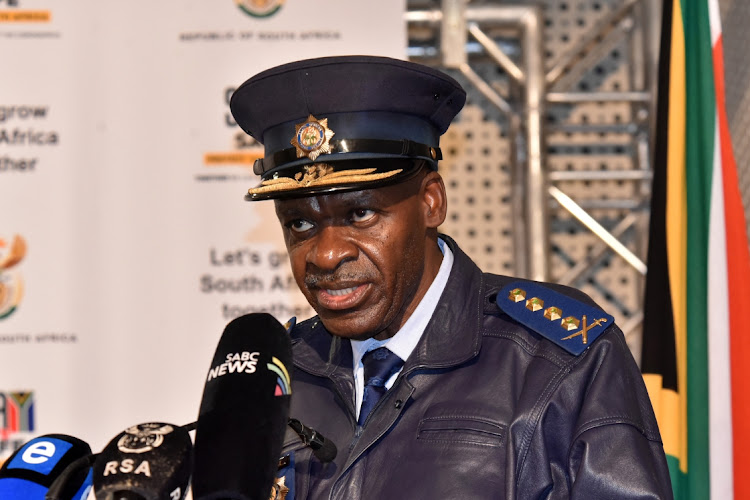 Police commissioner Gen Khehla Sitole commended all the law enforcement officials involved in this week's Rosettenville incident for a show of force and asserting the authority of the state. File photo.
Image: Freddy Mavunda

The latest breakthrough was the arrest of 10 suspects in Rosettenville this week after at least 25 suspects who were allegedly on their way to commit a CIT robbery were intercepted by a multidisciplinary team led by the national CIT task team in the south of Johannesburg.

Police spokesperson Col Athlenda Mathe said: “Policing disciplines worked tirelessly throughout the night combing the scene where the task team managed to corner the group of heavily armed suspects. During the ordeal, eight suspects were shot and killed and 10 suspects were arrested, two of whom are under police guard in hospital. The team also seized 10 high performance vehicles at an identified address, six AK47 machine guns, three rifles and explosives.”

An airborne law enforcement officer and two police members from the Moffatview police station were shot and wounded during the attack. A Johannesburg metro police department officer was also wounded.

One police officer has been discharged and others continue to receive medical treatment.

Mathe said: “The provincial commissioner has confirmed the health of the injured members has improved and all affected are in high spirits.”

Since its establishment in February 2020, the team, which is led by a female commander, has been responsible for the arrest of 202 suspects linked to CIT-related crimes.

Thirteen of these suspects are among the country’s most wanted criminals who have been involved in aggravated robberies, said Mathe.

“To date, 178 high-performance vehicles that were mostly hijacked have been recovered and 104 firearms were seized during arrests.”

To complement this team, the Directorate for Priority Crime Investigation (Hawks) has a task team to specifically focus on CIT investigations.

Sitole commended all involved in the Rosettenville incident for a show of force and asserting the authority of the state.

“The multidisciplinary team consisting of the national CIT task team, crime intelligence, members of the police air wing, the tactical response teams, K9, JMPD, Ekurhuleni metropolitan police department, Gauteng highway patrol and Road Traffic Management Corporation ought to be commended for their hard work and dedication in pursuing these criminals in the latest breakthrough. This latest incident ought to send a clear message to all criminals that we are coming for all of them and there is no longer a space for criminals to operate freely in SA. I also take this opportunity to wish all those injured a speedy recovery”, said Sitole.

A policeman was killed in a confrontation with suspected robbers in Rosettenville, Johannesburg, on Monday, as cops foiled a cash-in-transit heist, ...
News
5 months ago

Security guard airlifted to hospital after CIT robbery in Umlazi

A 41-year-old security officer is fighting for his life after being shot several times with high-calibre weapons during a cash-in-transit robbery in ...
News
5 months ago

A prison warder was killed and his wife and two children injured during a botched cash-in-transit heist on the East Rand on Friday.
News
7 months ago

Gauteng cash-in-transit heists down, but truck and carjacking cases up