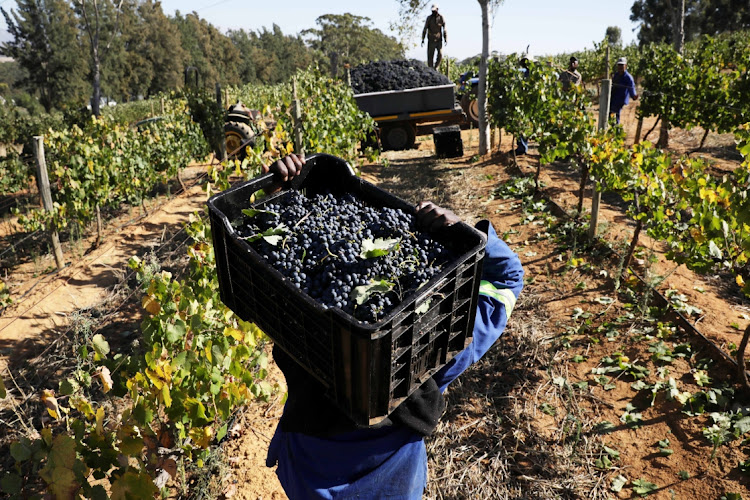 Farm workers harvest grapes at the Diemersfontein Wine and Country Estate in Wellington in the Western Cape on March 25 2021. Wine grape farmers and wineries have called on the government to exercise sound judgment when announcing excise duties during the national budget speech next week.
Image: Esa Alexander

SA wine grape farmers and wineries have called on the government to use sound judgment when announcing excise duties during the national budget speech next week.

Vinpro, which represents close to 2,600 SA wine grape producers, cellars and wine-related businesses, said while the industry was slowly recovering from the significant impact that domestic alcohol and travel bans had on its revenue streams, producers were also confronted with an exponential increase in input costs.

Vinpro and its industry partners said they had emphasised the plight of the local wine industry in discussions with the Treasury since last year.

“We believe that a specific dispensation is justified for the wine sector because it has been disproportionately affected by the Covid-19 lockdowns.

“In view thereof and because the wine industry already complies with the excise incidence rate, we have made a formal submission whereby we requested and emphasised the dire need for special dispensation for the wine sector, including only a marginal adjustment in excise duties,” Vinpro MD Rico Basson said.

It said in 2020, the government earned R6.1bn from excise and VAT, compared with producers’ gross income of R5.8bn.

Vinpro said the 2022 wine grape crop will on average be much more expensive to produce than previous crops.

Average expenditure at farm level could increase by up to 15%, compared with the 10-year average annual increase of 6.7%, with certain input costs expected to double.

Wineries may also have to absorb a further nearly 15% increase in glass prices, as well as a double-digit hike in other costs related to packaging such as paper, cardboard, plastic, labels and closures.

It said these extra costs came at a time when price increases for wine will “most likely move sideways” or remain below 5%, as the industry was still working on reducing the wine surplus.

“All of these factors place an extreme burden on wine grape producers and wineries’ cash flow and financial sustainability, which in turn affect their ability to reinvest and keep their people employed,” Basson said.

Tips for singles and those overwhelmed by V-Day

It is very important to not let the lovers day leave you feeling down and desperate. Here’s a brief guide on how to take care of yourself until all ...
Good Life
3 months ago

Pop the bubbly and plan a romantic dinner for two

Valentine's is coming and whether you have a romantic partner to spend it with or not, we have some suggestions for you.
Good Life
3 months ago
Next Article