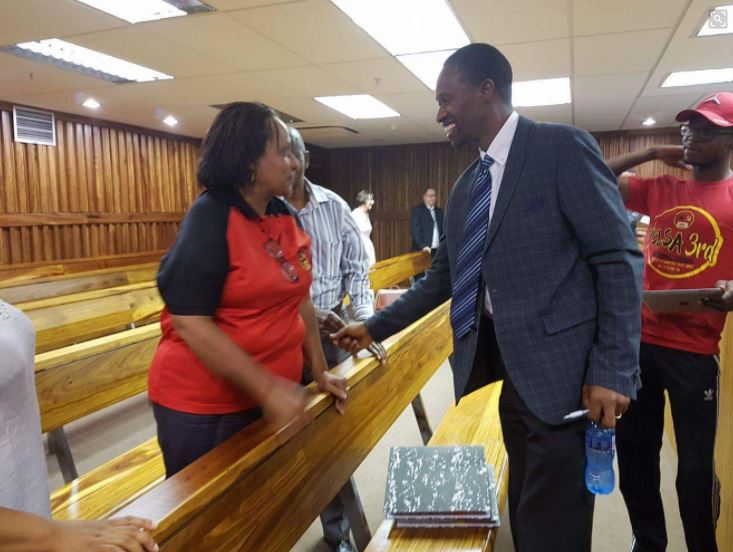 Former Cosatu international relations spokesperson Bongani Masuku (right) has been given 30 days to apologise to the SA Jewish Board of Deputies for harmful comments he made against the organisation. File image
Image: Twitter/Cosatu

Former Cosatu international relations spokesperson Bongani Masuku has 30 days to apologise to the SA Jewish Board of Deputies (SAJBD) for hate speech comments he made.

The Constitutional Court on Wednesday ruled on Masuku’s remarks, which included threats that Cosatu would target and do harm to SA families who had members serving in the Israeli Defence Force.

The case stems from a complaint lodged with the SA Human Rights Commission by the SAJBD in April 2009 about statements made by Masuku against Jewish South Africans.

One of the statements reads: “[A]s we struggle to liberate Palestine from the racists, fascists and Zionists who belong to the era of their Friend Hitler! We must not apologise, every Zionist must be made to drink the bitter medicine they are feeding our brothers and sisters in Palestine. We must target them, expose them and do all that is needed to subject them to perpetual suffering until they withdraw from the land of others and stop their savage attacks on human dignity.”

In December 2009‚ the SAHRC upheld the complaint‚ concluding that the remarks constituted hate speech against the Jewish community. It directed Masuku to apologise. When Masuku‚ backed by Cosatu‚ refused to do so‚ the SAHRC approached the Equality Court.

The commission took the matter to the apex court for leave to appeal the Supreme Court of Appeal (SCA) judgment which found that Masuku’s statements did not amount to hate speech.

“The respondents are ordered to tender an unconditional apology to the Jewish community within 30 days of this order or within such other period as the parties may agree. Such apology must at least receive the same publicity as the offending statement,” the judgment reads.

At the heart of the case were three fundamental rights — the right to equality, human dignity and the right to freedom of speech and expression.

These rights carried unique and troubled pasts interwoven into the fabric of apartheid history.

“In this constitutional dispensation, they are inextricably interconnected with what it means to be a citizen of a democracy, free to live a life in a condition of dignity and humanity. In this matter, these rights meet each other,” Khampepe said.

The Constitutional Court also dismissed Masuku and Cosatu’s application for former chief justice Mogoeng Mogoeng to recuse himself from the case.

“With all of this in mind it is perspicuous that the respondents not only failed to provide an interpretation of the comments that adheres to the standard of objectivity required by the test for bias, but have also failed to prove that Mogoeng CJ’s religious views and opinions render him incapable of impartially applying his mind to whether Mr Masuku’s statements constitute hate speech,” Khampepe said.

The SAJBD has welcomed the judgment.

"The ruling substantially upholds the conclusions reached by the SAHRC and thereafter by the Equality court that Masuku was guilty of contravening s10 of the Promotion of Equality and Prevention of Unfair Discrimination Act (Pepuda)," the body said.

Application is based on former chief justice's comments about SA's foreign policy towards Israel.
News
7 months ago

Chief justice Mogoeng Mogoeng has argued that judges should not be forced to pretend they don't hold strong views on religions to which they ...
News
2 years ago
Next Article