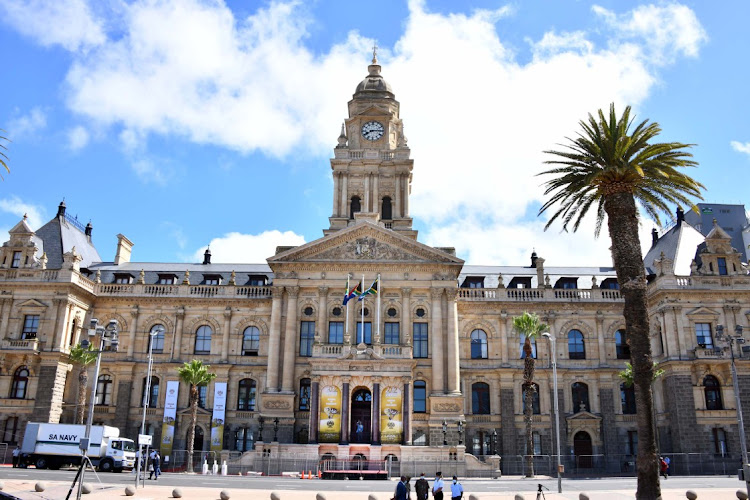 Preparations around the Cape Town City Hall ahead of President Ramaphosa delivering his State of the Nation Address (Sona).
Image: ELMOND JIYANE

President Cyril Ramaphosa will on Thursday evening deliver his fifth state of the nation address since taking over in 2018 in a tough economic and political environment.

For the first time in history the Sona will not be delivered in parliament after it was damaged by fire last month. Ramaphosa will instead speak to the nation from the Cape Town City Hall just a few streets away.

Ramaphosa will also be delivering his speech in a year in which he will be seeking re-election when his party, the ANC, goes to conference in December.

Within the party he is still facing challenges because of a faction aligned with his predecessor Jacob Zuma that is opposed to his leadership.

Though he is likely to be re-elected, Ramaphosa is expected to use this Sona to ramp up his support ahead of the conference, focusing on socioeconomic issues around poverty, unemployment and grants.

He is expected to announce an extension of the R350 social relief of distress grant to beyond March given the growing rate of unemployment in the country where almost half of the youth are without jobs. There have been calls for it to be increased to beyond the poverty line of R624.

Ramaphosa has had a tumultuous term in office and will deliver his Sona during a difficult period with growing unemployment, precipitated by a struggling economy and aggravated by the Covid-19 pandemic.

The unemployment rate, at 34.9%, has increased to its highest since 2008 with the youth being the most affected.

Ramaphosa is expected to announce plans about labour laws and job creation, with Cosatu calling for him to move away from economic policies that are suffocating the economy which, it says, have left half of the adult working population without jobs.

He is expected to report back on the more than 500,000 jobs that were created under the presidential employment stimulus as well as his investment drive that has so far seen billions of rand in commitments. Cosatu however believes at least two million jobs can be created under this umbrella.

While President Cyril Ramaphosa received cheers in Thakgalane Extension 1 for the completion of a 40km road, residents of nearby village, Thakgalane ...
News
6 months ago

Removing the national state of disaster is at the top of the Federated Hospitality Association of SA's wish list as President Cyril Ramaphosa ...
News
6 months ago

There are also calls for Ramaphosa to end the state of disaster which has been in effect since the advent of the Covid-19 pandemic in 2020. He is being persuaded to instead announce mandatory vaccines to effectively open up the country to allow economic activity to resume.

He is said to have received a report from a task team he appointed last year to look into the possibility of making vaccines mandatory, with that announcement said to be imminent.

Security and intelligence were compromised and undermined during Ramaphosa’s tenure with two security threats — the July unrest and the blaze at parliament — leaving a stain on his leadership.

Because of these incidents, the issues of security and intelligence are expected to form a big part of Ramaphosa’s speech, especially after a report into the unrest found that his government had failed to prevent it.

Intelligence and security have also been found wanting which has seen unprecedented attacks on state institutions and businesses during the July unrest and more recently with the torching of parliament.

Though Ramaphosa is yet to receive the last part of the Zondo commission report, he is expected to make pronouncements on how the perpetrators of state capture will be dealt with.

This is expected to be tied in with the strengthening and capacitation of the National Prosecuting Authority, Hawks and the Investigating Directorate, which have been complaining about a lack of financial support.