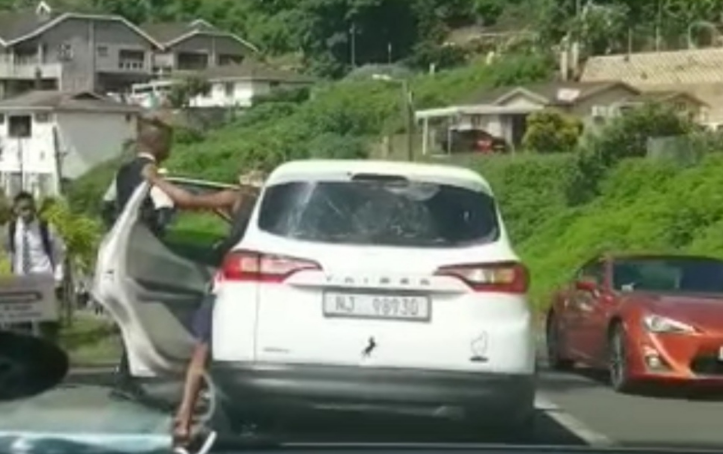 The alleged abduction of a school girl outside her school in Durban on Monday turned out to be a dispute between her and a male friend.
Image: Screenshot

A Durban schoolgirl who was whisked away in a car outside her school on Monday afternoon, in what was believed to be an abduction, is safe and sound.

A short video of the incident, which was captured outside a school in Avoca, north of the city, showed the girl being pushed into the back seat of a white Renault Tribeca by a young man.

The video, shared by a security apparel manufacturer, Action Bulletproof, went viral and sparked outrage among social media users who lambasted the person who captured the incident and bystanders for not intervening.

WATCH: A Durban schoolgirl was whisked away in this vehicle in what was initially believed to be an abduction but turned out to be a relationship dispute. She has returned home safely.
📽️ via Action Bulletproof@TimesLIVE pic.twitter.com/blQfaPydZz

“The mother of the Avoca learner who was allegedly abducted ... had confirmed to the CPF that the learner is safely home.

“It was a dispute between the learner and her male friend. The principal has been notified.”

CPF chair Rajiv Jayanth told TimesLIVE no criminal charge had been laid as “it was a domestic dispute”.

A person who finds out that they have been abducted as a child may go through a period of “mourning” for the life they missed out on.
News
8 months ago

Stella Kgomo, 22, shook in disbelief as her younger sister, 14, a Grade 7 pupil at EP Baumann Primary School in Johannesburg, detailed the horror of ...
News
8 months ago

The woman was abducted from her home in Atteridgeville on Tuesday by at least two men impersonating police officers, said Col Athlenda Mathe..
News
11 months ago
Next Article