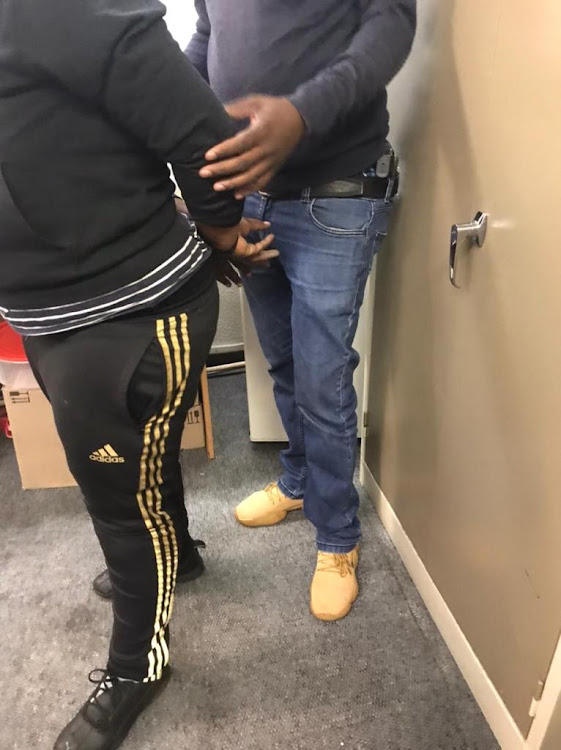 A woman has been arrested at the City of Joburg offices after she was found in possession of computer hard drives in the IEC offices of the building.
Image: Supplied

A woman behind a spate of burglaries at the City of Joburg offices was arrested  in the early hours of Monday as she attempted to steal more computer hardware.

The City's group forensics and investigation service (GFIS) spokesperson Lucky Sindane said at about 1am, security personnel who were on duty monitoring the CCTV cameras spotted the woman coming in through the emergency exit door downstairs.

“They then called for backup and to search for the person. JMPD [Johannesburg Metro Police Department] officers came through and they looked for this person from the first floor to the second floor. They then came to these offices [IEC — Electoral Commission of SA — offices on the second floor] and they did not find anyone. They became suspicious when they saw office doors opened. They went through to one of these offices where the door was locked.

“Behind the door, that’s where the suspect was hiding. They found her at that office, searched her and she was carrying a backpack. She was found in possession of the computer hard drives and other computer tools. When the officers asked her what she was doing she could not explain what she was doing in the building,” said Sindane.

He said  the woman — whose five companies are registered service providers for the City — was found hiding under a desk in the IEC offices.

When Sowetan arrived at the scene at 6.50am, the woman was  lying on the ground in handcuffs.  A black backpack, an IEC validation tablet, four computer hard drives, six memory chips, five processors and tools were in her possession.

Five damaged central processing unit cases were on the floor as well.

The police and JMPD officials are currently on the scene questioning the suspect.

Recently, the woman visited the administration offices in Braamfontein on January 24, where she allegedly strolled away with 30 computer hard drives from group legal and development planning, on the third and sixth floors.

Her visits were captured on the building's CCTV footage.

According to mayor Mpho Phalatse, the woman struck for the first time on October 14 2020.

She targeted the third, fourth and fifth floors at Metro Centre and GFIS.

On the day, she walked away with 20 computer hard drives.

Three days later, she was again spotted loitering in the building and metro police were called. She was arrested.

Sindane said it was established that on the day of the arrest she had used a false SAP number to gain access to the building.

She appeared in the Hillbrow magistrate's court on charges of theft, breaking-in and malicious damage to property.

The matter was withdrawn due to insufficient evidence.

A woman whose five companies are registered service providers for the City of Joburg has been identified as the bandit behind a spate of burglaries ...
News
4 months ago

The City of Johannesburg’s development planning offices have been rocked by burglaries and vandalism of property, with the latest crimes taking place ...
News
5 months ago
Next Article