Deliberations over who should be nominated for the role of chief justice take place on Saturday. 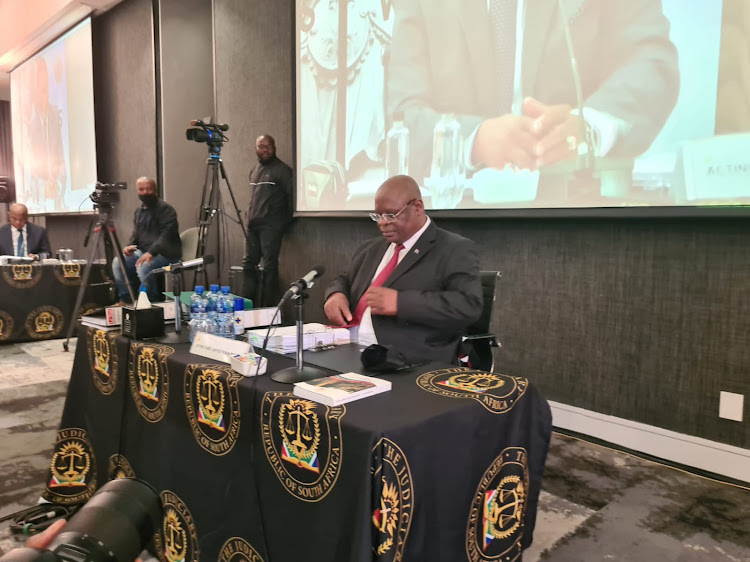 It was clear from the beginning of the question and answer session that acting chief justice Raymond Zondo would be in for a tough ride as he was interviewed for the role of chief justice.

By 9pm, 12 hours after first taking his seat, Zondo admitted to being tired. He faced questions on his work at the commission of inquiry into state capture, transformation on the bench and alleged bias towards President Cyril Ramaphosa.

But it was questions about whether justice minister Ronald Lamola had tried to improperly influence the appointment of acting judges at the Constitutional Court in favour of Judge Dunstan Mlambo that got temperatures high, leading to a shouting match between Lamola and commissioner Julius Malema.

Mlambo is also in the running for the position of chief justice and was interviewed on Thursday.

He told the commission he had recently been asked to act as a judge of the Constitutional Court, and was invited by Zondo.

On Friday, Zondo revealed that Lamola had written to him, suggesting Mlambo be given an opportunity to act at the ConCourt as the nominations process was unfolding.

The end result was a shouting match between Malema and Lamola.

The EFF is dragging acting chief justice Raymond Zondo to the Judicial Conduct Committee (JCC) as it accuses him of withholding information of his ...
News
6 months ago

LISTEN | I am not pro-Ramaphosa, I just made a lot of enemies, says Zondo

Raymond Zondo seemed out of touch with the judiciary, says expert

Acting chief justice Raymond Zondo was consumed by the commission of inquiry into state capture and seemed out of touch with issues affecting the ...
News
6 months ago

Friday's interview of deputy chief justice Raymond Zondo is expected to be the crescendo with the pattern of questioning likely to get even more ...
News
6 months ago
Next Article