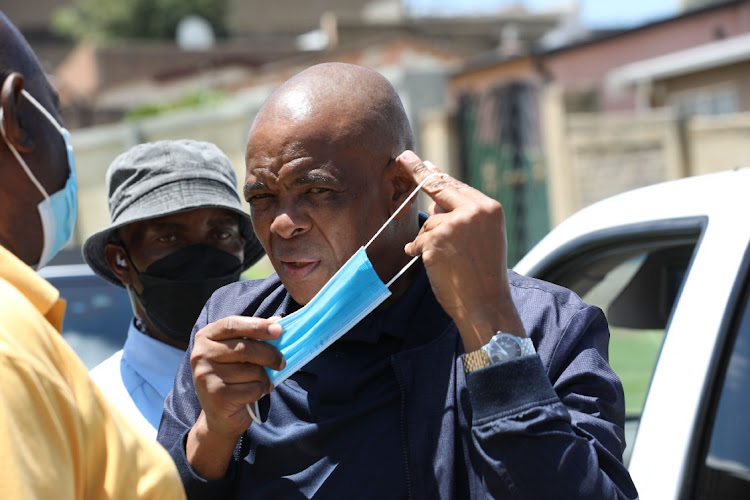 As the ANC’s secretariat position remains unoccupied with Ace Magashule suspended and his deputy Jessie Duarte being ill, Magashule has cautioned that attempts to deploy an 'outsider' would create factionalism. File photo.
Image: VELI NHLAPO

As the ANC’s secretariat position remains unoccupied with Ace Magashule suspended and his deputy Jessie Duarte on sick leave, Magashule has cautioned that attempts to deploy an “outsider” would create factionalism.

And if factionalism is allowed to persist, he says there will be no ANC in 2024 when the country holds provincial and national elections.

EWN reported a week ago that a heated debate had ensued at the party’s last NEC meeting over whether Gwen Ramokgopa should be deployed to the secretariat position in Luthuli House.

Commenting on this, Magashule said there was no need to deploy any other person as treasurer-general Paul Mashatile had been holding the fort and full-time staffers could be used. He mentioned Nomvula Mokonyane, Malusi Gigaba and Dakota Legoete among other ANC figures.

“You don’t need any other person outside that team which is full-time and being paid for that matter. If you go outside, you are actually saying you don’t trust and therefore don’t want these people and therefore you become factional,” said Magashule.

The National Education, Health and Allied Workers’ Union confirmed on Wednesday it has taken the ANC to the labour court over unpaid salaries to its ...
News
6 months ago

ANC, IFP and NFP most affected by KZN political killings

Internal conflicts within the ANC, IFP and NFP have resulted in the parties being most affected by political killings in KwaZulu-Natal, police ...
News
6 months ago

“Once the ANC becomes factional now, I can tell you, let it be so, then there is no ANC come 2024 elections.”

The debate comes as preparations for the party’s elective conference in December get under way.

For the sake of the party’s survival, Magashule said: “I wish and hope that leaders of the ANC can come to their senses and understand how the organisation works without being factional.

“I so wish and hope that we will use 2022 to ensure that the ANC comes together and unites because what we have done now, we have given power to a constable, we have given power to the courts and judges. There is no more power about the ANC, and I think it is time to flash back, retreat a bit, analyse, take a giant step forward and ensure that when you talk about renewal and unity you mean it.”

Magashule will remain suspended after losing a court bid to have his party suspension set aside. He had petitioned the Supreme Court of Appeal (SCA) after failing to persuade the Johannesburg high court to grant him leave to appeal last year.

He approached the SCA with the hope it would overturn the high court, which had upheld his suspension. Magashule also wanted the SCA to reverse the high court’s finding that there was nothing unconstitutional about the ANC’s “step-aside” resolution.

In a single paragraph, the SCA dismissed his application with costs — without a hearing.

Magashule is facing charges of fraud and corruption relating to a R255m tender for an audit of asbestos roofing in the Free State. He is due back in court later this month.

He was suspended from the ANC in May 2021 after he was indicted in accordance with the party’s step-aside rule. The rule holds that if a member of the party is indicted on criminal charges, they should step aside from their position. If they do not, they may be suspended.

In his appeal petition, Magashule insisted the ANC had unlawfully narrowed down the scope of the rule.

Asked about his next move, Magashule said he would appeal against the outcome in the Constitutional Court.