Pensioner murdered during hijacking in Linden was set to emigrate

'We were going to give him a farewell on Saturday. Now we have to do a memorial instead,' says estate manager 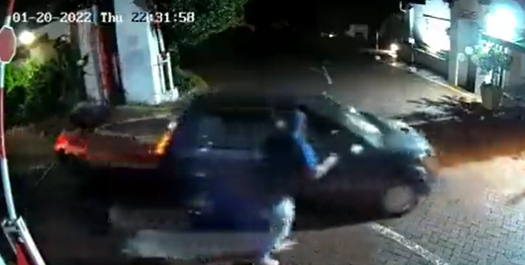 An elderly man was murdered during a hijacking in Linden, Johannesburg, at the weekend.
Image: Screengrab

The murder and hijacking of a pensioner in Linden, Johannesburg, at the weekend has left residents of the frail care village in which he resided traumatised.

Felix Gay, 72, was supposed to attend his farewell this coming Saturday as he was planning to emigrate to the UK to live with his son. Instead, a memorial service will be held in his honour on that day.

Marianette Lloyd, estate manager of Darrenwood Village, said the incident, which was caught on CCTV and has been circulating online, was “senseless and unnecessary”.

“One suspect was traced to Eldorado Park and apprehended. The suspect is in police custody,” said the Linden Community Police Forum.

In the video, the victim can be seen entering the gate at night. Immediately a man points a gun and fires a shot at close range. A security officer who is approaching runs for cover. Two men approach and drag the injured victim out of the driver’s seat during a struggle and drive away with the car, leaving his body on the ground.

“It was an unfortunate incident. A very dear resident was killed for nothing. It affected a lot of people. Fortunately, one suspect has been arrested,” said Lloyd.

“It was very unnecessary because he was an old and unarmed person. His car was not new.

“He was going to emigrate to the UK to stay with his son. We were going to give him a farewell on Saturday. Now we have to do a memorial instead.”

She said the car has not been recovered.

“He was loved by everyone in the village — him and his dog. He lifted everyone. A gentle giant you could wish for as a friend, and a bunch of hooligans murdered him.”

Gay's dog is being cared for by another village resident.

Two hijacking victims were found bound, gagged and unconscious in the boot of their car in Cape Town early on Tuesday.
News
7 months ago

Four suspects linked to a gang responsible for car hijackings and armed robberies in the south of Johannesburg were arrested at the weekend.
News
7 months ago

Seven people suspected of carrying out a spate of courier van robberies were cornered and arrested during an alleged hijacking on the N3 highway in ...
News
8 months ago

Gauteng cash-in-transit heists down, but truck and carjacking cases up