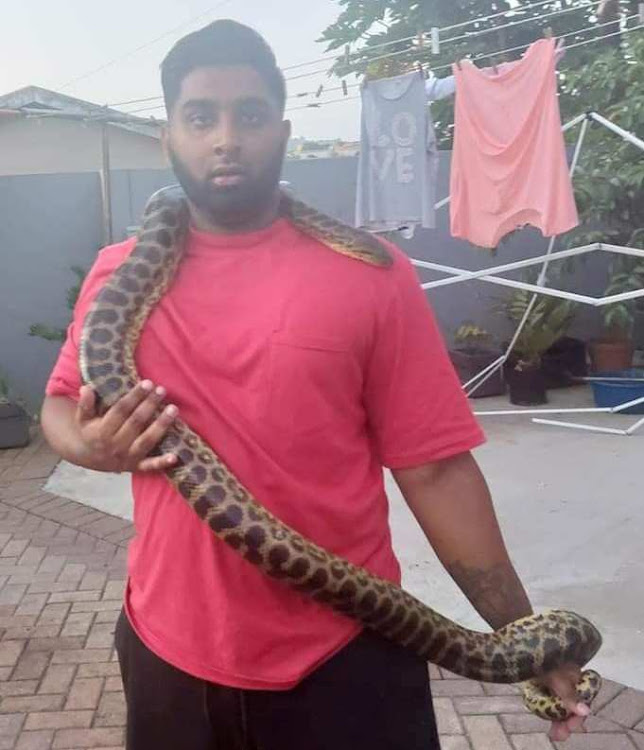 Preesen Nair said the yellow anaconda escaped in Starwood, Phoenix on Thursday. He told TimesLIVE on Monday the snake had been found.
Image: supplied

A 1.8m pet anaconda which escaped from its home in Phoenix, north of Durban, on Thursday has been found.

However, owner Preesen Nair refused to say whether the snake, named Medusa, was dead or alive.

“I cannot comment on that. All I can say is that it has been found,” he told TimesLIVE on Monday.

Nair said his decision to withhold information on the circumstances of the return of the reptile was based on “at least six death threats” he received via social media after his alert about the missing anaconda.

He did not disclose details of the death threats, but said he would consider reporting it to the police as it was not something he could take lightly.

On Friday, hot on the heels of the movie Anaconda trending after it was aired on e.tv, Nair said his beloved family pet, a yellow anaconda, had escaped while her enclosure was being maintained.

“When the enclosures are being maintained the snakes are housed in locked plastic tubs. This is the practise throughout the world. She managed to escape. While the snake is big, we didn’t hear it slither away,” he said at the time.

Nair, who owns “more than a dozen snakes”, said the yellow anaconda was non-venomous.

He did not need a licence to keep a yellow anaconda, he said.

The news of an anaconda on the loose did not seem to invoke fear. Instead, South Africans joked on social media that the snake escaped from the television channel, was going to eat up all the residents in Durban and the film’s stars Ice Cube and Jennifer Lopez were on their way to save the country.

Pet anaconda Medusa on the loose in Phoenix

A 1.8m pet anaconda is on the loose in Phoenix, north of Durban.
News
5 months ago
Next Article