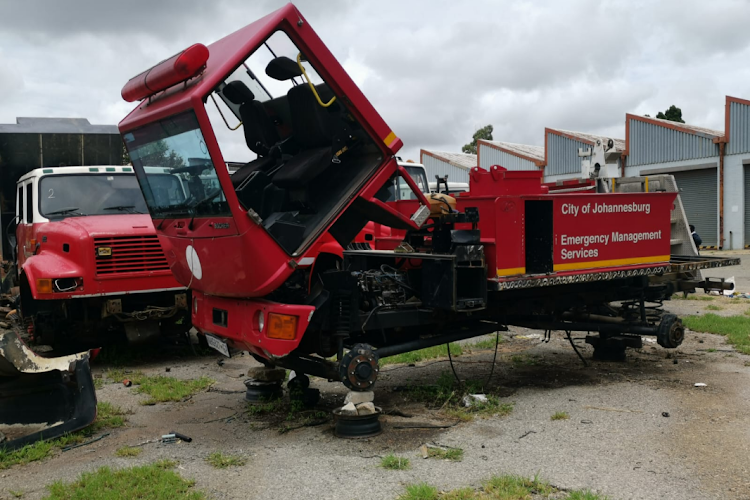 City of Johannesburg assets are being stripped of valuable parts at former workshops and an asset storage facility in Florida.
Image: Joburg City

Johannesburg asset storage facilities have been looted and money which should have gone into the city coffers is in the hands of thieves.

Finn has been trying to alert the city to the theft for several months.

“I visited the city’s former workshops and now asset storage facility in Florida with senior management and the local ward councillor, where we discovered extensive and widespread stripping of city assets,” said Knott.

“We developed a plan to beef up security at this site, finally dispose of these old assets and make sure that guilty parties are prosecuted for their part in the theft of city assets.”

Three people have died in an attempted fuel theft incident on the Transnet fuel pipeline in Durban in the early hours of Sunday morning.
News
9 months ago

The Florida facility is home to several depot buildings and workshops, some dating to the 1940s, and has been used to store old vehicles and office equipment pending their sale.

The facility is host to more than 50 fire engines and other firefighting vehicles, which are to be sold after being scrapped because of the high cost of repair.

The facility was secured by one security guard, who has been powerless to prevent the thefts.

Knott said security would be strengthened to prevent further theft and auctioneers will be approached in March to sell the remaining assets.

“The city will look to repurpose and redevelop the facility through public-private partnerships so that it can be an asset to the residents of Johannesburg. Initial proposals are to convert the workshops into a training facility for youth in the automotive sector.”

She said this was part of the “Golden Start” initiative to uphold the rule of law and to restore the city as the economic heart of the country.

The city's group forensics and investigation unit has concluded an investigation into the theft which implicates former city employees. Cases have been opened with the police but there have been no prosecutions to date.

Knott said the city will track the cases with the National Prosecuting Authority to ensure that guilty parties are prosecuted.