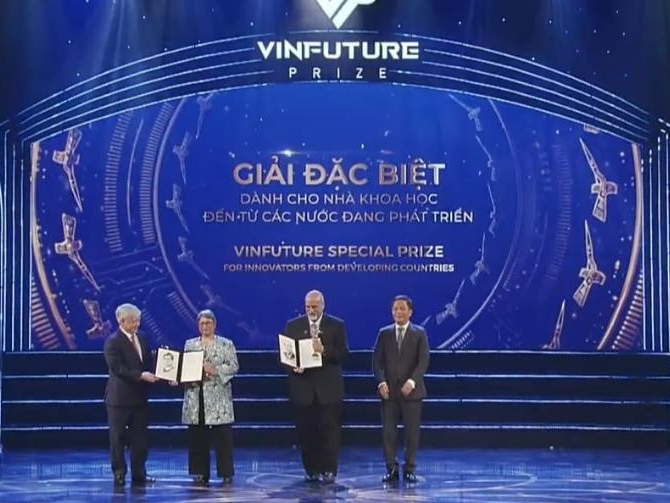 Durban scientists and infectious disease epidemiologists professors Salim and Quarraisha Abdool Karim have been honoured in Vietnam for their ground-breaking research on HIV prevention in SA.
Image: supplied

SA’s royal couple of epidemiology have bagged another award.

World-renowned Durban scientists and infectious disease epidemiologists at the Centre for the Aids  Programme of Research in SA (Caprisa), professors Salim and Quarraisha Abdool Karim have been honoured in Vietnam as inaugural recipients of a VinFuture special prize for their ground-breaking research on HIV prevention in SA.

The couple were awarded the VinFuture Special Prize for innovators from developing countries at a ceremony held at the Hanoi Opera House in Vietnam on Thursday.

The award programme is part of the VinFuture Foundation, an independent, non-profit organisation set up by Phạm Nhật Vượng, the first Vietnamese billionaire and founder and chairperson of the largest Vietnamese conglomerate, VinGroup Corporate, with his wife, Phạm Thu Hương, to create meaningful change in the lives of millions by recognising and rewarding transformative innovation in sci-tech.

Almost 600 nominations across 60 countries were received for the prize. Of these, nearly 100 were for the world’s top 2% most-cited scientists, many of whom are themselves laureates of distinguished awards including the Nobel Prize, Japan Prize and Tang Prize.

“The Abdool Karims have tirelessly championed the importance of science in defining the HIV and Covid-19 response,” said chair of the Caprisa board Bongiwe Ntuli.

“SA is blessed to have such world-class scientists whose research is making the world a better place.”

The couple said the 2022 prize for scientists in developing countries was “a beacon of recognition for the many scientists in the developing world who toil away each day in their laboratories, clinics and libraries, that scientific excellence is achievable in the midst of adversity.

“While we serve as its recipients, this prize is recognition for the dedication and commitment to excellence by a team of more than 200 researchers in SA, with collaborators from five continents and thousands of volunteers who have participated in our studies over the past 33 years,” they said.

The ceremony honoured the winners of the inaugural VinFuture prizes, including the $3m (about R45m) VinFuture grand prize and three $500,000 (about R7.5m) Special prizes for female innovators, innovators from developing countries and innovators with outstanding achievements in emerging fields.

The special prize for female innovators was awarded to Prof Zhenan Bao from the US for her work on developing flexible electronics with the sensing properties of human skin.

The special prize for innovators with outstanding achievements in emerging fields was awarded to Prof Omar Yaghi, also from the US, for his work on discovering metal-organic frameworks.

“The VinFuture prize recognises truly outstanding scientific work that has made and will make a positive impact on the lives of millions, or even billions, around the world,” said VinFuture Prize Council chair prof Sir Richard Friend.

“The winners have brought new solutions for some of the most significant challenges humanity is facing, such as infectious diseases and meeting the urgent need for zero carbon energy. The VinFuture prize celebrates the power of science and technology to solve global problems.”

Which drugs can be used to treat Covid-19 besides vaccines?

The World Health Organisation (WHO) has recommended two new drugs to treat patients with Covid-19, one for patients with critical disease and another ...
News
5 months ago

Medicine deliveries the future after Covid-19 proves their worth: UCT researchers

When Covid-19 hit SA and stigmatisation was at its peak, many healthcare workers were shunned in their communities due to fear of the virus.
News
5 months ago
Next Article