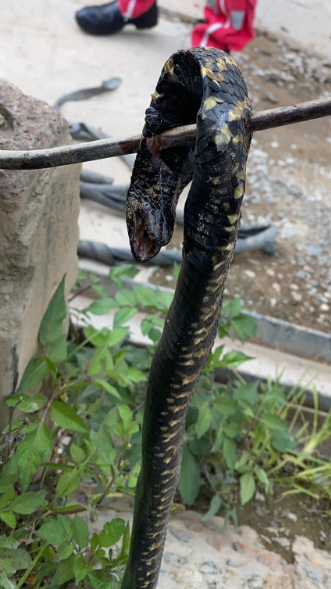 A pregnant woman was rushed to hospital on Friday after being bitten by a snake at an office in Himeville, KZN.
Image: Underberg EMS via Facebook

A 28-year-old pregnant woman was rushed to hospital on Friday after being bitten by a snake at an office in Himeville, KwaZulu-Natal.

According to Underberg Emergency Medical Services (UEMS), paramedics were called out after reports that a woman was bitten by a snake.

When they arrived, they found she had sustained a bite from a ringhals on her right hand.

“Reports from the scene indicate that the patient was in her office when she got up to go to the bathroom and found the snake in the doorway.

“While trying to escape through the door past the reptile, it struck the patient on the hand,” UEMS said in a statement.

Paramedics suspected the woman sustained a dry bite, but because she was 21 weeks pregnant she was transported to a Pietermaritzburg hospital for further care and monitoring.

The snake was killed by employees on the property.

Most parts of the Southern African region are currently experiencing persistent rainfall and it is common knowledge that snakes, in these conditions, ...
Opinion
5 months ago

Sightings of four venomous snakes on the same road within two hours on Tuesday had residents of a Durban suburb shaking.
News
8 months ago
Next Article