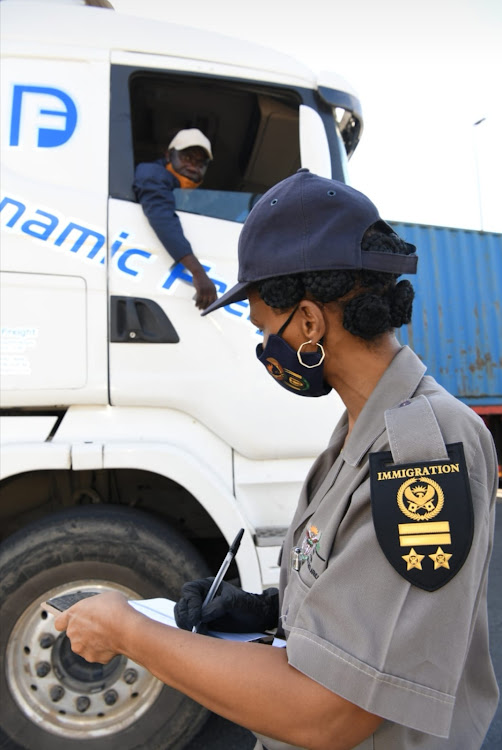 A law enforcement operation aimed at ensuring compliance in the freight industry was conducted in Durban on Thursday.
Image: Supplied

Five foreign truck drivers were arrested in Durban on Thursday morning during a law enforcement operation aimed at ensuring compliance in the freight industry.

The operation, which the KwaZulu-Natal government said would be the first of many, was scheduled to be held at three sites around the city, including Maydon Wharf, which is used daily by trucks to access the port.

The operation, which included the police, defence force, traffic authorities and the departments of home affairs and labour, focused on:

The operation comes in the wake of recent violent truck protests in KZN and complaints by local truckers about foreigners being employed by SA logistics companies in preference to them.

Premier Sihle Zikalala said five drivers had been arrested for not being in possession of proper documentation and he expected the number to increase.

“We are doing this because there have been complaints about the domination of foreign nationals in the freight and logistics industry.

“These foreign nationals are supposed to be driving with permits and all required documents. In most cases you find that most of them are driving without these documents,” he said.

Zikalala called on labour minister Thulas Nxesi “to expedite the policy that will regulate the employment of truckers in SA”.

“We don't believe SA companies that are based here should prioritise people from outside SA. That's why we call on the minister of labour to expedite the policy.”

“We will also be engaging with the freight and logistics industry. If they prioritise South Africans and employ people who are local, that will help solve the problem,” he said.

“It's not that we are saying foreign drivers can't drive in SA. We are saying that if the company is based somewhere in Africa, they are fine to come and drive here with the proper documents.

“If the company is based in SA, let that company prioritise South Africans.

“They can see for themselves we are working to address their concerns.”

Three men have been arrested for allegedly stealing petrol from a tanker parked at a Gauteng police station.
News
3 weeks ago

Police spokesperson Brig Jay Naicker said 12 truck drivers, whose vehicles obstructed the flow of traffic and who defied instructions by police to ...
News
1 month ago

One of the first things President Cyril Ramaphosa planned to deal with on Wednesday, after returning from his West Africa tour, was the truck ...
News
1 month ago
Next Article