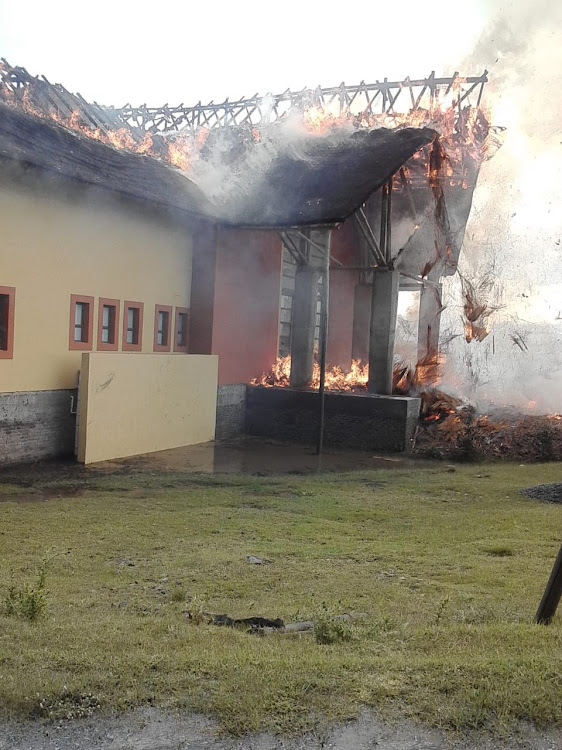 The Welcome Centre in former president Nelson Mandela's home village of Mvezo was destroyed after being struck by lightning.
Image: Mandla Mandela

The Mvezo Welcome Centre — a contact point for tourists visiting the birthplace of former president Nelson Mandela — was completely destroyed by fire after a lightning strike on Saturday.

Heavy rains and storms have lashed the Eastern Cape, causing flooding and leaving at least one person dead.

Mvezo chief, and Mandela's grandson, Mandla Mandela, confirmed the destruction of the centre in a statement on Saturday. He said the building's thatched roof caught fire.

“This was an act of nature and no foul play or any other cause is suspected. It is regrettable that we have lost this infrastructure, which was at an advanced stage of construction. R10m was spent on the first phase and the lightning mast poles were not installed yet,” he said.

The centre was funded through the National Lottery, and had a total budget of R17m — “of which R10m was spent”.

“We assure the local community and our development partner, the National Lottery, that no sabotage was involved and that the cause was beyond anyone's control,” he said.

Forensic investigators are combing the scene at the department of justice regional office in Cape Town where a wooden door was allegedly set on fire.
News
4 months ago

The devastating fire that left parliamentary buildings destroyed has forced parliament to move the annual state of the nation address to another ...
News
4 months ago
Next Article