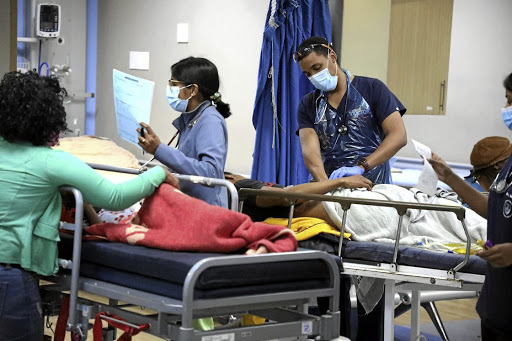 Doctors in one of the cities where Omicron was first identified say the surge driven by the new variant has been marked by less serious disease than earlier waves of the pandemic and there are clear signs that case and hospital admission rates may decline over the next few weeks.

The mortality rate during the Omicron surge was 4.5%, compared to 21.3% in the earlier period, they reported in the International Journal of Infectious Diseases . Omicron patients were discharged after an average of 4 days, compared to 8.8 days for patients with earlier variants.

At the peak of the Omicron surge, the number of beds filled with infected patients was half of that in the earlier period, and 63% of Omicron patients were hospitalised for other reasons, with the virus only detected by mandatory tests.

“The Omicron outbreak has spread and declined... with unprecedented speed, peaking within four weeks,” the researchers said. They noted that outcomes may vary in countries with different population characteristics and levels of immunity from infection and vaccination. But if the pattern seen in SA “continues and is repeated globally ... Omicron may be a harbinger of the end of the epidemic phase” of the health crisis.

Meanwhile, researchers believe they have discovered an important way to identify SARS-CoV-2 variants that are likely to spread.

Looking at 9-unit strings of molecules called nucleotides - the building blocks of genes - they found that except for Beta, which did not circulate widely outside of SA, each new variant has had more unique strings than the variant that immediately preceded it.

The original, or wild, version of the virus had 45 unique so-called 9-mers, the researchers reported on Thursday on medRxiv review. Alpha had 109 unique 9-mers, Beta 69, Gamma 122 and Delta 181. The currently dominant Omicron variant has 295.

Many of these stretches of altered polynucleotides have nothing to do with the spike the virus uses to break into cells, which suggests researchers should not focus only on the spike protein, said Venky Soundararajan of Massachusetts-based data analytics company nference. The spike is the target of most current Covid-19 vaccines and antibody treatments.

Soundararajan said a variant circulating in France, called IHU, has more distinct 9-mers than Delta but has been unable to out-compete Omicron. Because IHU has not circulated widely outside of France, he said, populations have not acquired immunity to it, and variants that have yet to emerge in other places may find it “useful” to develop some of the same 9-mer mutations.

Vaccine manufacturers should pay attention to IHU's unique nucleotide signatures because there is a good chance they will show up again in future variants, Soundararajan said.

The Association of Southern African Travel Agents (Asata) has urged the Mauritian government to lift its ban on travel from SA.
News
7 months ago

Speaking for the first time since the incident, President Cyril Ramaphosa has insisted that he abruptly left an ANC Women's League event on Thursday ...
News
7 months ago
Next Article