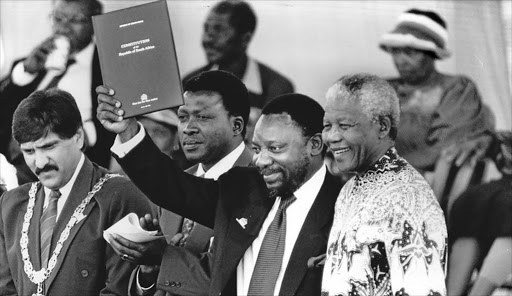 Cyril Ramaphosa stands next to then president Nelson Mandela as he holds up a copy of the new South African constitution at its signing in 1996. Archive image.
Image: ROBBIE BOTHA

The devastating fire at parliament has offered South Africans an emotive opportunity: to hear a key political speech delivered from the Cape Town City Hall where Nelson Mandela first spoke to the nation on his release from prison, Cyril Ramaphosa at his side.

Parliament's presiding officers on Friday confirmed the City Hall will host the state of the nation address (Sona) on February 10.

National Assembly Speaker Nosiviwe Mapisa-Nqakula and National Council of Provinces chairperson Amos Masondo pledged: “Following a sad and devastating week in which fires that started on Sunday and destroyed parliament's buildings, including the National Assembly and sections of the Old Assembly chamber, we made a solemn undertaking that, despite the devastation of the disaster, we will not allow a situation where parliament’s work is derailed or disrupted in any manner.”

They said the City Hall was considered a suitable venue technically in terms of infrastructure and its capacity — as well as its historical significance.

It was the first place where Mandela addressed the nation after his release from prison on February 11 1990, accompanied by Ramaphosa in his capacity as the chair of the national reception committee, a body set up to co-ordinate the activities that followed Mandela's release.

On May 9 1994, the late Archbishop Desmond Tutu introduced Mandela to thousands of jubilant South Africans on the same balcony after his election in the NA as the first democratic president.

A full-sized statue of Mandela was erected on the balcony in 2017 and an exhibition inside the City Hall is dedicated to Madiba as a permanent feature. Mapisa-Nqakula and Masondo said they were confident of a successful Sona, which is the only occasion that brings together the three arms of the state — the legislature, the executive and the judiciary — under one roof.

“As South Africans we are resilient people, we have overcome many difficulties in the past. We will rise from these ashes and rebuild, restore, renew and march forward in our continuous endeavour to build a democratic, nonracial, non-sexist, united and prosperous society we all aspire to.”

They reassured South Africans that “no stone will be left unturned to get to the bottom of what transpired this week”.

In contrast to the fiery statement issued on Wednesday morning, in which the party accused the DA-led city of a political ploy and of being "highly ...
News
4 months ago

State of the nation and budget speech will not be affected by fire, say parliamentary presiding officers

Parliamentary presiding officers will meet with stakeholders on Monday including the public works minister Patricia De Lille to assess damage and ...
News
4 months ago
Next Article