Tutu was a symbol of peace and reconciliation — Cosatu 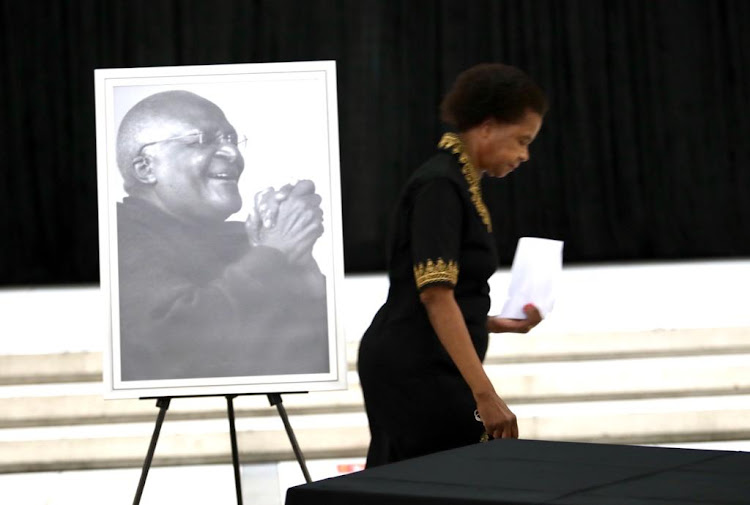 Tributes continue pouring in for Archbishop Desmond Tutu who died in Cape Town, Western Cape, on Sunday morning, with Cosatu saying the country has lost a towering figure and a man of principle who became a symbol of peace and reconciliation.

Parliament's presiding officers, speaker of the National Assembly Nosiviwe Mapisa-Nqakula and chairperson of the National Council of Provinces Amos Masondo also paid tribute to Tutu and praised him for the immense contribution he made to the struggle against apartheid and the creation of the new democratic dispensation.

Cosatu spokesperson Sizwe Pamla said, “He fought and outlived the brutal system of apartheid and dedicated his life to reconciling enemies and forge a common nation united in its diversity. He sacrificed a lot and dedicated his life not just to free and serve his people but to also build a truly united, democratic, nonracial, non-sexist, and prosperous SA.

“He was a principled leader of society whose courage and wisdom were unmatched, and whose love for SA and its people knew no bounds. The world is poorer without him, and he will remain a beloved hero and a symbol of hope for the oppressed.”

The Tutu Family has thanked South Africans and the world who kept Archbishop Emeritus Desmond Tutu in their prayers, and whose love and respect for ...
News
7 months ago

Pamla said “as a nation, we must, on this occasion, intensify our commitment to the cause of justice, equality, and freedom that Archbishop Tutu campaigned for during his entire life”.

Mapisa-Nqakula and Masondo said the nation has not only lost a true advocate and a gallant fighter of liberation and democracy but a father and the quintessence of love, peace and hope.

“Archbishop Tutu diligently served the country and had remained faithful to his calling of service to the people. He fought hard for the liberation and freedom of the country and has, through his humble nature, inspired all of us and led with great wisdom and passion worthy of emulation,” they said in a statement.

The presiding officers said the Arch, as Tutu was affectionately known, never hesitated to express his critical voice against any occurrence or move he regarded as unconstitutional or against the ethos of democracy and the spirit of the rainbow nation.

“Although he retired from public life, he continued serving as an irreplaceable voice of reason, an ever-flowing fountain of wisdom, a beacon of hope and an incomparable moral compass for the nation of SA and the world. He never wavered on matters of principle. As a servant of God and a spiritual leader of His people, he spoke and led with truth; he shouldered the pain of his people and battled with them for a life of dignity, justice and equality.

“He fought fiercely and with great courage and fearlessness against the apartheid regime, which he described as “is evil, totally and without remainder”. During post-liberation, he fought with equal force and zeal, laying a solid foundation for peace and reconciliation for new SA. Throughout his life, he remained a true patriot and a fearless leader of the people. He led from the front even in very difficult times of repression, unapologetically speaking truth to power no matter the circumstances and remained a humble servant of the people of SA.”