Tributes begin to pour in for late Desmond Tutu 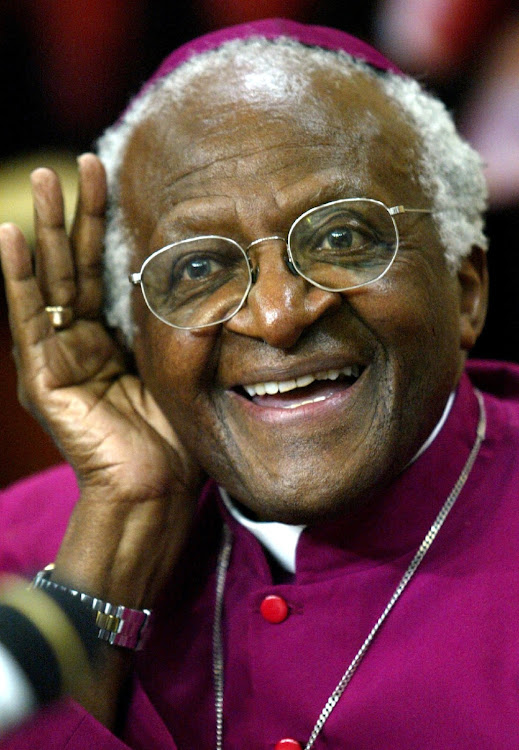 South African Nobel Peace Prize laureate Archbishop Desmond Tutu listens to a reporter as he addresses the media and slammed the U.S.-led assault on Iraq March 21, 2003 saying military action was immoral. Tutu was speaking during a ceremony to mark the release of the final report of the country's Truth and Reconciliation Commission in Pretoria.
Image: JUDA NGWENYA/Reuters

Tributes for Desmond Tutu began to flow soon after his death on Sunday morning with the Archbishop of Cape Town Thabo Makgoba lauding the clergyman for his moral strength, moral courage and clarity.

Makgoba said in a statement that the church will plan Tutu’s funeral and other memorial services with the support of the government and the city of Cape Town which will be held in accordance with Covid-19 regulations.

He said prayer, the scriptures and his ministry to the people God had entrusted to his care were at the heart of Tutu’s life.

“He believed totally that each one of us is made in the image of God and ought to be treated as such by others. This belief was not reached through cerebral contemplation; it arose from his faith and was held with a deeplyfelt passion. He wanted every human being on earth to experience the freedom, the peace and the joy that all of us could enjoy if we truly respected one another as people created in the image of God.

‘Because he believed this, and because he worshipped God, he feared no-one. He named wrong wherever he saw it and by whomever it was committed. He challenged the systems that demeaned humanity. He could unleash a righteous anger on those — especially the powerful — who inflicted suffering upon those the Bible calls “the least of these, my brothers (and sisters)”.  And when the perpetrators of evil experienced a true change of heart, he followed the example of his Lord and was willing to forgive.

“Desmond Tutu’s legacy is moral strength, moral courage and clarity. He felt with the people. In public and alone, he cried because he felt people’s pain. And he laughed — no, not just laughed, he cackled with delight when he shared their joy,” Makgoba said.

"It is with great sadness that I have to announce that our dearly beloved Archbishop Emeritus of Cape Town – and the 1984 Nobel Peace laureate – Desmond Mpilo Tutu died a short while ago at the age of 90." - Archbishop Thabo Makgoba of Cape Town

“The passing of Archbishop Emeritus Desmond Tutu is another chapter of bereavement in our nation’s farewell to a generation of outstanding South Africans who have bequeathed us a liberated SA. Desmond Tutu was a patriot without equal; a leader of principle and pragmatism who gave meaning to the biblical insight that faith without works is dead.

“A man of extraordinary intellect, integrity and invincibility against the forces of apartheid, he was also tender and vulnerable in his compassion for those who had suffered oppression, injustice and violence under apartheid, and oppressed and downtrodden people around the world.

Ramaphosa noted that as chairperson of the Truth and Reconciliation Commission Tutu had articulated the universal outrage against the ravages of apartheid and “touchingly and profoundly” demonstrated the depth of meaning of ubuntu, reconciliation and forgiveness. In the democratic dispensation he had remained true to his convictions and held the leadership and burgeoning institutions to account.

“In his richly inspiring yet challenging life, Desmond Tutu overcame tuberculosis, the brutality of the apartheid security forces and the intransigence of successive apartheid regimes. Neither Casspirs, teargas nor security agents could intimidate him or deter him from his steadfast believe in our liberation.”

“Like falling in love” is how Archbishop Desmond Tutu described voting in SA's first democratic election in 1994, a remark that captured both his ...
News
6 months ago
Next Article